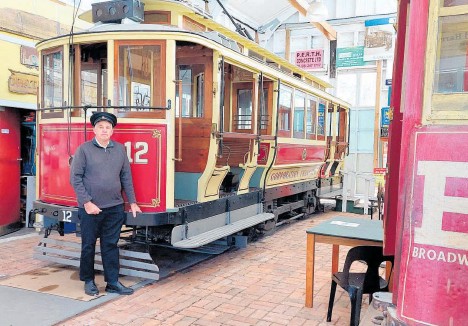 Pat Seconi, tram shed volunteer and motorman, is April’s Volunteer of the Month. Last week, Sandra Rickey, Volunteer Whanganui manager, presented Pat with a certificate, a lapel badge and a $40 voucher from Mud Ducks Cafe. Pat was nominated by Bruce Kelly, Tramways Whanganui operating committee chairman, who holds Pat in high esteem for his abilities and commitment to the project. “He started going down to the tramshed in 2007 on Saturday mornings and helping wherever needed on his days off. Pat has continued his association with the tram ever since,” says Bruce. “At one stage he even served on the Tramways Trust, but found he preferred the practical side of operating the tram rather than the politics of the trust. Pat is our go to man for both tram and tramshed maintenance. His knowledge of the mechanical side of the tram is invaluable. He keeps the tram operating as smoothly as it does.” Pat started at the tramshed in 2007. “It’s part of our town’s history,” says Pat. “I love history but it’s better to focus on one thing than a number of things, so when the tram came into town I was quite excited, because I’d heard stories from my mother and father about when they were young and rode on the trams.” Pat also remembers wondering why certain shops seemed to be in odd spots on particularly wide streets, until it occurred to him that they were situated at what used to be tram stops. The first day the tram was up and running, taking members of the public on its short journey, was very special. “We had something like 1100 people come for a little ride.” He says while quite a few locals still come down to ride the tram, most of its travellers are from out of town. “We’ve chartered tours come in, have a ride then go off to the club, or something like that, making a day of it. Quite often when we run the tram on a Sunday, people hear the bell, know the tram’s running and bring the kids down.” Pat was involved in getting the track put down, learning in the process how to bend steel rails from the railways staff who came to help. Everything was going well until June 2015, when the river flooded and put all the work back about 18 months. “Everything was sent down to Palmerston North to be stripped and cleaned.” Pat wants to see the tram become more a part of Whanganui tourism. “I’d like to see a circuit, that’s the dream, or the long term plan.” He says locals should be able to see it operating, not just down at the river. Of course, the tramshed can always do with more volunteers. The main qualification is enthusiasm and spare time, but if anyone with mechanical aptitude would care to put their hand up, they would be most welcome. “Come along for the company,” says Pat. “We have a training session once or twice a year.” Bruce Kelly can have the last word. “Aside from our regular Thursday morning sessions, Pat is often down the Shed at other times carrying out maintenance on the shed and tram, often at a personal cost. Without Pat, it would be hard to visualise the tram operating in the way it does. He often says his major disappointment is that the tram is not already running on the streets of Whanganui. However, he is now part of the team working on getting this project moving forward again.”