Rebellion and life in Balkhash millisphere

Balkhash Millisphere: a discrete region inhabited by roughly onethousandth of the world population. Dividing Kazakhstan by watershed produced the millispheres of Kazakh, Aral and Balkhash named after Lake Balkhash. There are 3.3 million people living in the Balkhash basin, in Kazakhstan, not enough for a millisphere. We need to add the watershed in China to qualify. There are another 2 million Kazakhs and Chinese living in the Illi valley on the Chinese side of the border. Eighty per cent of Lake Balkhash’s inflow comes from the Illi River, which rises in the Tien Shan mountains in Xinjiang in China. As one would expect, there is a growing demand for water in China, which has increased its irrigated crop area in the Illi valley by 30 per cent in the past two decades. The Illi river also suffers from industrial pollution in China. The Lake Balkhash water level has dropped 2m since the 1970s and it looks like a repeat of the Aral disaster. Like the Caspian and Aral seas, Balkhash is an endorheic basin (no exit to the ocean) and Balkhash was once an interconnected system of 16 lakes (some freshwater and some saline). Now there are five lakes and there has been a major loss of surrounding ecosystems. The Illi River flow into Balkhash has been reduced by about a third. China refuses to ratify the UN law of trans-border water use, claiming an absolute right to the water regardless of the consequences; and that “the water is needed to provide power and food to the burgeoning populations of the region”. Almaty, the largest city in Kazakhstan, was also the political capital before the government moved to Nursultan in the millisphere of Kazakh to the north. An important staging post on the historic Northern Silk Route under the Soviet Almaty became a place where exiles were sent. Trotsky was sent to Almaty when he fell out of favour with Stalin, and New Zealanders sometimes go there to teach the children of the kleptocracy. Sitting on China’s “One belt, One road”, Almaty is a multicultural city. Uighurs run restaurants selling fatty mutton dishes, and there is still a sizeable Russian population. Mike, a teacher from Northland, liked the Russians. “Because they are no longer the top dogs they are not as arrogant as the Kazakhs; and they were always trying to get me drunk.” Mike’s wife liked skiing in the mountains nearby. My friend Chris also enjoyed his time teaching in the “Big Apple” — Almaty is thought to be where the apple originated. Like me, Chris has a geography degree. “Chinese money is building new railway lines and roads all over Kazakhstan, I don’t know how they are ever going to pay for it,” Chris said. China is thought to control 40 per cent of Kazakhstan’s oil production. Last year, 4000 Chinese freight trains passed through Kazakhstan on their way to Europe. At Khorgos, on the Chinese border in the Illi valley, they change all the bogies under the trains because Kazakhstan railways run on the Russian gauge, which is different to that in China. When Kazakhstan became a republic under the rule of Nursultan Nazarbayev, there was a feeding frenzy for the previously state-owned property and businesses characterised by nepotism, political cronyism, corruption, violence and intimidation. Almaty had large squatter communities and when developers attempted to demolish some in Shanyrak in 2006, large-scale riots broke out. A year later 600 police came and arrested the ring leaders. Poet Aron Atabek was sentenced to 18 years in prison, and in 2012 he smuggled out of prison and published Heart of Eurasia, which called for the squatters to be given their “miserable 0.06-hectare plots”. For this, he was put in solitary confinement and the squatters of the Shanyrak Asar (cooperative) are still negotiating for titles to their homes. Also from Almaty is cyber pirate Alexandra Elbakyan of the Sci-Hub website. Reed Elsevier, the Londonbased publisher of (governmentfunded) university research, is not happy. 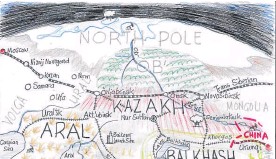 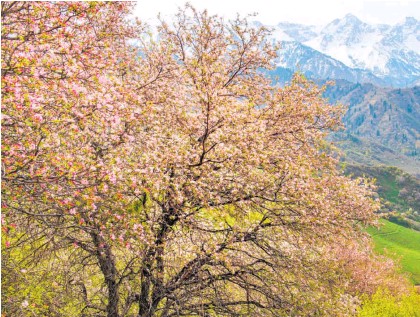