As I put quill to parchment this evening I’m reminded that history tends to repeat itself and tales told by candlelight are still as much part of life now as they have always been. The pandemic is still devastating lives unpredictably worldwide. Quarantine boundaries are still part of international protocol and will continue to be volatile until vaccine production and delivery have been reliably and consistently organised internationally. When that will happen I have no idea, as long as politics and finance remain chess masters in the contest. Meanwhile, trade and travel are hobbled. The plague stone at Penrith still stands. Maybe it will be put to good use again if things deteriorate in the UK. The Cape family departed London in mid-July 1962 and had driven, in a 1948 Anglia, through Wales. We had been a month on the road through the British Isles. My parents, my sister, and I, with our cageload of white mice, had survived dragons and mist shrouded landscapes. We had visited craft folk and cottage industries. We had been ambushed by wayward Welsh goats, and fed them with biscuits and arrived eventually in Chester. Now we headed for Penrith and Whitby. My father’s diary again takes up the narrative. August 24, 1962, Friday A windy and showery night, but the tent dried out well and didn’t leak. Away by 10.30 and into Penrith. Parked, shopped, saw C10 (10th century) tomb of King of Cumbeland (ph) (photographed) and 2 lions hm (heraldic design and a collection of weapons.) also “Arthur’s Round Table”, where the local myth (this where Arthur jousted) sits badly with the MOW’s explanation (a bronze age Henge badly damaged in C18). Also plague stone where town and country exchange money in great plague, and 1700 beacon on hill used to warn of border trouble. On to Appelby, a royal borough, past miles of unused railway tracks (line is closed) to Brough — wide streets, brown town; and castle (didn’t visit). Visited (after crossing Bowes Moor: stone shelter walls only windbreak for blackfaced sheep). Bowes Castle: Norman including Roman remains. Visit Barnard Castle (ph. castle and bridge): no paper in public toilets: see Bowes museum — like a French palace. Out towards DARLINGTON and camped on a side road. Sheltered from savage westerly which chased us from Penrith: rain starts at dark. August 25, 1962, Saturday Right away from the Kendal Mint Cake — Cumberland Rum Butter country, now, and into Yorkshire Pudding. Up early, and away from what turned out to be a dry, well sheltered camp, by 10.30. Shopped in Darlington (the market, as usual, fascinating), out to Aycliffe to see a guitar and banjo-maker. Found huge industrial estate, but no manufacturing. Hardly a country workshop, anyway. Back through Darlington and start for Whitby, flying blind. Country very like Hawke’s Bay (ph.). At Guisborough, ph. Priory ruins, then to moors. B (Barbara) tries to photograph small blackfaced sheep, but they don’t co-operate. On to see Fylingdales radar installed (ph.) by way of Grosmont: little village: steep 1 in 4 valley with hill 1 in 4 on way down, and 1 in 4 and then, horrifyingly, 1 in 3! on way up. Car made it. After closer look at Fylingdales golf ball, back to Whitby. Medieval countryside (ph) then into town. Fascinating harbour (ph.) fishing smacks (ph.) and rock shops (ph.). Up to Abbey: arrive just before 7 to find place shut. Get bloke to open up. Lovely ruin (ph.). Cooked sausages, peas and b/beans (baked beans) in car (scorched back of my seat doing it) had dinner while sun made Abbey golden at sunset, and floodlights made it silver and grey afterwards. Away in dark, through bigger and bigger seaside resorts. At last, at 11, after turning inland, find spot under trees: camped. The photo taken of Fylingdales shows a broad flat dark landscape with spherical white radar domes scattered in the distance like golf balls on a green, hence my father’s succinct imagery. As usual the landscape was steeped in history. Hilltop abbey ruins were picturesque in the sun. My sister and I made friends with amiable donkeys roaming at Whitby Priory. Whitby is not only famous for being a centre for fishing and whaling from early days, it also has a reputation for rock shops, and I don’t mean pebbles and granite, or heavy metal music. I mean rock in the sense of candy and sweets. I have a photo of my sister, my mother and me outside an unnamed sweet shop with open front street side windows displaying boxes of treats of every colour and shape. The inscription on the window frame reads WHITBY LETTERED. There are currently several rock shops in Whitby with names such as Janes, Sandgate, and Candy Rock King. Sixty years can alter everything but in places like Whitby the past is still recognisable. The rock shop in my photo may well still be there. I hope so. It was good candy. Whitby Abbey is also the location that inspired Bram Stoker to tell the gothic tale of Dracula. It was here that Captain James Cook grew up and trained on the waters of Whitby harbour, eventually following his compass to the other side of the world and back. The replica of HM Bark Endeavour, based in Australia, visits Whitby occasionally. I served as a uniformed guide on board and slept overnight below decks as security when it visited Wellington several years ago. Our day drew pleasantly to a close. Over the coming week we would see more iconic locations, visit distant relatives and see how the British Government was dealing with its housing crisis. 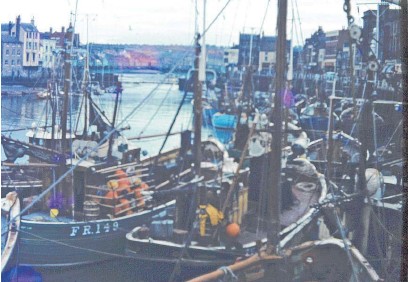