Power pack sets up Dmac for the finish

Damian Mckenzie has done it again, kicking the Gallagher Chiefs to the Super Rugby Aotearoa final, confirmed when the Blues lost to the Crusaders. There is no debate that the Chiefs will play the Crusaders in the final. Even if the Blues win this weekend and match the Chiefs’ 20 points, the Chiefs will have more wins which in a countback when teams are tied. Two weeks ago in Dunedin, Mckenzie knocked over the matchwinning penalty to sink the Highlanders in golden-point extra time; two weekends back he nailed another late penalty to push the Chiefs in front against the Crusaders. Last Friday night in Hamilton, the All Blacks utility iced a 45m, two minutes into added time, to secure the Chiefs’ fifth win in succession. All Blacks lock Tupou Vaa’i was a standout all night for the Chiefs with his physicality and work rate shining through. It was his breakdown penalty in the 78th minute that gave the Chiefs the chance to snatch another dramatic victory. Moments later, Mckenzie never looked like fluffing his lines. One month ago in Wellington, the Hurricanes inexplicably blew a 19-point lead against the Chiefs — that win sparking the change in fortunes for a team that had lost 11 matches in a row. In many ways the Hurricanes are the Chiefs of last season — consistently in the fight, so near, so far, as they fall agonisingly short each week. Jason Holland’s men could not have done much more in Hamilton. After being locked 10-10 at halftime, Jordie Barrett did his utmost to inspire, as he has all season. Second-half tries to replacements Billy Proctor and Asafo Aumua gave the Hurricanes a one-point lead with 11 minutes to play but they could not hold on at the death. The Hurricanes are rooted at the bottom of the table with one win from seven games. The Chiefs can, meanwhile, contemplate a final round trip to Eden Park before the final. Not long ago the prospect of Clayton Mcmillan’s side being in the big dance was laughable. No one is laughing now. Other than Vaa’i and Mckenzie, loosehead prop Aidan Ross shone for the Chiefs with his powerful scrummaging efforts playing a pivotal role. Openside Lachlan Boshier, in his second match back, continued to prove his worth at the breakdown, too. Bryn Gatland also helped spark the Chiefs with their only try of the second half after selling a dummy to crash over. The Hurricanes took the match to the Chiefs early with James Blackwell claiming the opening try in the second minute after busting through and putting on a right-foot step following a sly short ball from Tyrel Lomax. That seemed to rock the Chiefs, with Gatland kicking out on the full from the restart which allowed the Hurricanes to immediately resume their initial onslaught. The visitors should have garnered greater rewards from their early dominance but Dane Coles, assuming the captaincy from the injured Ardie Savea, elected to take a quick tap and Peter Umaga-jensen spilled the ball to squander the early dominance. After defending desperately in the opening stages, the Chiefs soon regrouped to settle into their work. The locals were dangerous when generating quick ruck ball and Mckenzie regularly chimed into the line to direct their attack but they, too, struggled to convert pressure into points. Anton Lienert-brown dropped the ball over the line and midfield partner Alex Nankivell was pushed out in the corner down a narrow short side and so it was left to the dominant Chiefs scrum to lead the way. With Ross shunting All Blacks tighthead Lomax, the Chiefs twice overpowered the Hurricanes’ scrum. On the second occasion, Pita Gus Sowakula drove over to claim the Chiefs’ first try. Other than the opening exchanges the Chiefs had the better of the first half but Barrett nailed a 55m penalty as the halftime hooter sounded to lock the teams up at the break. The tight tussle continued throughout the second spell until Mckenzie’s clutch talents again stepped up. After another late victory sealed five on the bounce, who would bet against the Chiefs now? ■ Chiefs 26 (Pita Gus Sowakula, Bryn Gatland tries; Damian Mckenzie 2 cons, 4 pens) ■ Hurricanes 24 (James Blackwell, Billy Proctor, Asafo Aumua tries; Jordie Barrett 3 cons, pen) HT: 10-10 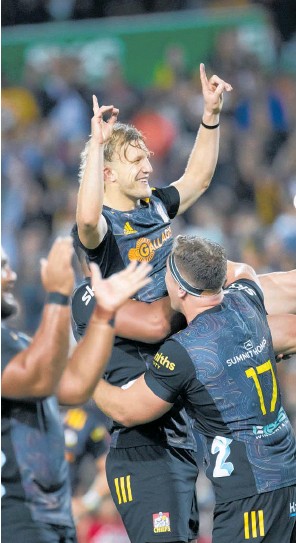