Caitlin Smith to visit on tour

Backstage Pass is pleased to announce the next Arts on Tour New Zealand show to visit Te Awamutu will be Brave Caitlin Smith’s Imaginary Band. The concert will be the third for 2021, following on from the success of My Secret Life: Ian Sinclair and The Carnivorous Plant Society. Caitlin Smith (piano and vocals), Lance Mcnicholl (guitar) and Steve Cournane (percussion and cymbals) form a dream team performing jazz and folk music. They will perform at Highfield Country estate Lodge Lounge at 7.30pm on Wednesday, May 5. Caitlin Smith’s latest album You Have Reached Your Destination creates a multisensory universe unto itself — Braille and a tactile labyrinth within the cover art, poetry and footsteps recorded between 14 originals. A mesmerising, prolific and passionate performer, Caitlin sandwiches originals between the tastiest covers. The Caitlin Smith Trio (and earlier incarnation The Fondue Set) have held down well-loved residencies in Auckland for over two decades. This year marks the release of a collaboration/cd with the Auckland Jazz Orchestra, East of the Sun. Caitlin is a mesmerising performer, song-poet and story singer. Legally blind since birth, she is a tireless advocate for accessibility issues and the healing and transformative power of creativity. A vocal and songwriting coach to many of our bestknown artists, Caitlin combines poetry and music in unforgettable performances that include her original compositions as well as covers. Joining her is session, gigging and touring musician and film score composer Lance Mcnicholl — a go-to guitarist in Aotearoa since the 80s. Lance also works with Mahinarangi Tocker, Women in Blues, Steve Garden’s Elephunk, the Nairobi Trio, Band R (with Murray Mcnabb), Gahu and currently Fat Mouse. Completing the Imaginary Band is Steve Cournane — a drummer and composer who began playing with the Alpaca Brothers in Dunedin, in 1984. Steve won a Tui for NZ Jazz album of the year in 2002 for the album Stereoscope by CLBOB. Tickets for Brave Caitlin Smith’s Imaginary Band are available from Te Awamutu i-site Centre and eventfinda.co.nz — booking fees apply. 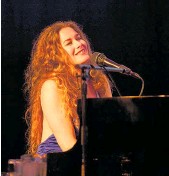