With Parliament in recess last week, Minister of Transport Michael Wood had a busy day out in Hamilton on Thursday. With Hamilton East and West MPS Jamie Strange and Dr Gaurav Sharma, Hamilton mayor Paula Southgate and Tainui Holdings CEO Chris Joblin, Wood visited the site of the future Ruakura Superhub at Silverdale Rd, next to the University of Waikato. Tainui Group Holdings (TGH) is developing the 490 hectare project which is supported by the government investing $16.8 million from the Provincial Growth Fund and $40m through ‘shovel ready’ projects. TGH CEO Chris Joblin said: “There are currently earthworks under way to build roads and preload the sites for the first buildings which will start construction shortly and open in October next year.” Located within the so-called golden triangle of Auckland, Tauranga and Hamilton, the project spans industrial, commercial, retail and housing development areas with a 30ha inland port. Minister Wood said he was excited to be on site of a project of national significance. “What I am absolutely impressed and inspired by is the depth and quality of partnerships here. We are seeing mana whenua, central government, local government, the commercial sector and the community all at the table.” To fully develop the Superhub it will probably take 15 years, Joblin said. “But the current work takes about 18 months.” Wood said the project creates 12,000 jobs and it could potentially take 60,000 freight trucks off the road by shifting them on to rail. “It is more environmentally friendly by contributing to solving traffic congestion and it’s going to help decarbonise our transport network.” During his visit, Wood also gave an insight into the new Te Huia commuter train service from Hamilton to Auckland “We never had the expectation to have full trains at the beginning. We funded Te Huia as a five year startup service, the point in being productive during the travel time. I get a report on customer satisfaction every week, and so far it has been looking very good.” The question on when the expansion of the transport corridor with rail links to smaller Waikato towns will happen remains open. “The Waikato is a really ambitious region — the train has only been going for three weeks, so there isn’t a date yet.” 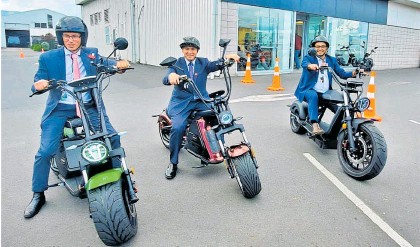 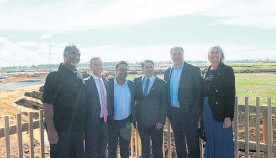 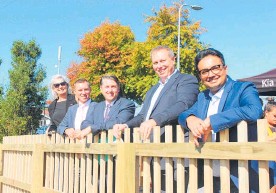