Hamilton building apprentice Lucile Richardson, 21, has won the Waikato regional round of New Zealand Certified Builders (NZCB) Apprentice Challenge and will compete in the national finals in June. The Waikato challenge on April 10 had the highest number of entries from all regional challenges. The participants, two women and 10 men, had to build a picnic table following specific design plans and safety standards and were judged according to technical aspects like quality, measuring, cutting, the ability to follow a detailed plan and safe working technique. Lucile, now in her third year of apprenticeship at Graham Walker Builders in Rukuhia, had participated in the challenge in 2019 — when she was only three months into building. “I had to compete against fourth year apprentices and there were a lot of things I didn’t know, for example that you are allowed to take pre-made plans with you. I didn’t even get the product finished then, that’s why I placed last, so the pressure was on for this year’s round,” she says. For the 2021 challenge, Lucile made sure she was well organised, spending five hours the day before to prepare. “I think it was easier for me this time cause I am a better builder than I was two years ago. But you still compare yourself to the others and when you look around and see that everyone is finished, you get a bit worried.” But Lucile says she has a really good boss who knew she would have a good chance this time. “He worked with me on my weaknesses and although the other participants finished earlier than me, my measurements were more precise.” Her boss Adam Walker went to cheer her on for most of the day, and brought a whole support crew. “My wife, kids and another workmate John came over to support her. We are colleagues, but I would say we are also friends.” He says he is proud of what Lucile achieved. That she became a builder was a coincidence: When she finished high school at Sacred Heart Girls’ College, she didn’t know what to do next, she says. “I knew I wanted an active job where I don’t sit in the office all day. My partner Elliott is a builder as well and my dad works in construction, so they suggested I do a pre-trade course at Wintec.” At the end of the course, Lucile knew she wanted to continue building and do an apprenticeship. So Wintec put Adam Walker from Graham Walker Builders in touch with her. “You need to have a tough shell to be in building as a women: It is a male dominated field and they already have an opinion about you before you even start working. It is on you to prove them wrong,” Lucile says. Adam says Lucile is not only his first female apprentice, but also his first apprentice in general. “It is neat to have some diversity, which hasn’t been seen in the construction industry for quite a while. I think that women are absolutely capable of doing the same work as men.” When Lucile started building she also realised that building was not only about physical work. “I was surprised how hard it is, physically, but also mentally. You need to be smart to become a builder, you work long hours and long days, but you are pretty proud when you come out the other end.” However, she is happy with her job. “I love working with my four workmates, we always have good banter. And you can’t beat working outside in the fresh air in summer. I can 100 per cent recommend becoming a builder as a woman. You will be surprised how much you can do.” Adam says Lucile is clever and easy to work with. “She is a good listener. I remember from my apprenticeship that lots of young males act like they know everything and when it comes to starting work they stand around looking awkward. But Lucile takes everything on board and when we arrive on site, she unpacks the tools and is ready to go. I find it very refreshing.” Lucile says her favourite tool is the nail gun. “Because you feel cool when you use it.” So far, Lucile has done and helped with about 100 jobs during her apprenticeship, amongst those decks, pergolas and houses. “Every little job you do has its little thing you are proud of.” Lucile’s next big step is the preparation for the national finals of the NZCB Apprentice Challenge in Wellington at the NZCB Annual Conference on June 11 and 12 where she will compete against 18 other regional winners — only one of them is also a female building apprentice. “I’m so excited for Wellington, but I have no idea what will come. I expect it to be hard, maybe something with weird angles and difficult shapes like circles.” Adam says he believes Lucile will make it far in the national challenge: “I don’t see why she wouldn’t be winning.” 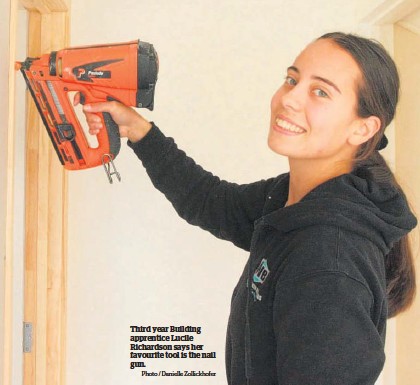