Ateam of young footballers attended a prizegiving ceremony at St John’s College in Hamilton last month to celebrate winning a title last brought to the school in 1995, well before the current players were born. The players celebrated their win over a barbecue lunch with friends and wha¯nau, and are also up for the “Team of the Year” award at St John’s Senior Sports Awards on October 25. The St John’s First XI team beat Hamilton Boys’ High School 3-1 on September 17, effectively clinching the Waikato Secondary School premiership title as a result. Only St Peter’s from Cambridge could catch them — but it would have required them to win by a monster margin and St John’s also to lose heavily. As it was, St John’s drew 1-all with Cambridge High School, and St Peter’s were beaten by HBHS 6-0. The last time St John’s name was engraved on the premiership cup was 26 years ago. The last two matches followed a four-week spell where games were postponed and the team’s training was hampered, due to a shift in Covid19 restrictions in August. “Because we weren’t able to train together, we tried to encourage the boys to go for runs and post their times online to motivate one another,” says coach Geraint Walters, who had the team back to training three days a week as soon as alert levels shifted and it was safe to play again. When St John’s took on HBHS on pitch 2 at Melville United’s Gower Park home, it was a title decider match in all but the name. The match was sewn up by St John’s in the first half, as Riley Sexton, Thomas Roach, and Thomas Walters scored to put St John’s 3-nil ahead by halftime. Walters conceded even he was surprised by the margin and encouraged his side to “keep playing at the same tempo and not push themselves too hard”, moving into the second half of the game. Hamilton Boys’ scored in the second half but were unable to catch St John’s, who took the game 3-1. Once all the games had been completed, St John’s were declared the winners of the league, two points ahead of Hamilton Boys’ High. For parents of the Year 13 players, the end of the season was “bittersweet”, having shared the sidelines for five years and “forming friendships along the way”. “We’ve really enjoyed cheering the boys on and seeing their skills and teamwork develop,” says St John’s football mum, Cate Prestidge, whose son Edward Prestidge-king plays goal. “It’s the end of an era for a few of us also, as our boys prepare to leave school. “I’m really going to miss being part of this group, but both boys and parents have made some lifelong friends. “What will we do with our Saturday mornings now?” says Prestidge. Fellow football mum Lorna Slone wrote on Facebook: “Super proud in particular of the Year 13 boys who have been in this together for a long time. “These lads have shown over and over again their dedication and that football is a fantastic sport.” Slone, whose son Sam plays in defence, went on to thank Walters, St John’s football coordinator Hayden Miller and manager Kerron Sexton for their support. Walters also paid tribute to the work of Rohan Kandoi who was responsible for the team’s strength training. It’s the end of an era for St John’s — the players are heading off and the coach has also announced that after eight years he’s retiring. But the young team members will continue to make an impact. Thomas Walters — who is the son of Geraint — Karson Grant and Thomas Roach have signed for Hamilton Wanderers and Riley Sexton has signed for Auckland City. Many of the boys have played club football alongside their school team commitments, and intend to continue this in the future. The St John’s squad for the 2021 season also included Toby Dowsett, Johan Garcia-cedeno, Reilly Benefield, Rhys Mcleod-dunn, Brooklyn Miller, Jakob Dowd, Antoneo van Deursen, Matthew Jordan, Rejo Johnson, and George Heal. (Heal was unable to play in the finals as he was stuck in Auckland’s lockdown.) 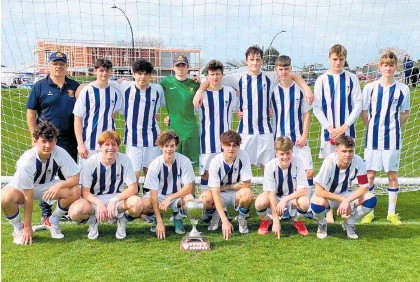