Cambridge boy Cameron Leigh, and his friend Angus Syme from Christchurch, both 21, struggled to find a decent bed as students in Dunedin, so they started the Flatpack Co helping other students in need. The two boys met in 2018 while studying finance and accounting in their first year at Otago University living in the same hall of residence - Cumberland College. Angus says: “It all started in the wild streets of Dunedin. We lived two doors down from each other at Cumberland and became friends straight away. When it came towards our second year at uni, we decided to flat together.” And what does anyone most definitely need in a flat? A bed. Angus says that as a student there were pretty much only two options. “You can either buy one from a retailer where the cheapest one is $1500 which is often out of budget. Or you buy one second-hand which is a nightmare to organise and store until you actually need it. And they are often pretty disgusting with marks where you don’t want to know where they came from.” Like many other students, Cameron and Angus both went for the more affordable option and bought a second-hand bed. “So we were pretty much the first customers for our own business,” says Angus. Cameron says the Flatpack Co started off as a project and wasn’t originally thought to become a business. “We had so many people come to us that made us realise this is a massive problem for all students. But we didn’t know anything about business, we had no idea of marketing, we had to learn everything from scratch.” So the two young men started off by buying every second-hand bed they could get their hands on. One summer that was about 30 beds. Angus says their car wasn’t even big enough to fit a bed, so they were transporting the mattresses on top of the roof, holding it in place by hand. “There was no way we could scale this up nationally. The only way to do this is through import.” The two aspiring businessmen wanted affordable, quality beds and found them in Malaysian and Chinese manufacturers. Looking up their numbers online, Angus and Cameron spent long nights in front of the telephone trying to get in contact with the manufacturers overseas. Angus says: “But there was a massive language barrier, they hardly spoke English and we don’t know Chinese or Malaysian. And we didn’t have any credibility as two students. It just didn’t go anywhere.” After three months without any breakthrough, they found the number of an Auckland-based agent online. Cameron says: “The agent is another retailer in the market working with manufacturers. He believed in us and backed our idea.” The agent hooked Cameron and Angus up with a manufacturer and works with them on behalf of the Flatpack Co. What started with 30 second-hand beds now turned into a business with a million-dollar revenue selling 1600 beds last year. The Flatpack Co offers three different mattresses while the sturdy and easy to assemble bed frame is always the same. Cameron and Angus said they made sure the bed frame is set up a bit higher off the ground for extra storage space underneath the bed. Their prices, including delivery, bed frame and mattress range from $700 to $1050. Cameron says: “It was super exciting. The coolest thing was in our first year of sales. Up until the beds were delivered it was all online, on-screen. But when the 1200 products arrived truck after truck, we realised ‘Wow, we did a thing here.” He says that all up it came to about 20 trucks coming and going to deliver the mattresses and bed frames to different storage units. To get their name out there when they first started they went for an unusual “campaign”. Angus says: “We put up posters in every toilet cubicle in every hall of residence in every university in New Zealand. Our phones were going nuts and within weeks everyone had heard of us. It also got us in the naughty books with the unis telling us we can’t do that and have to take them off. “But we thought it’s better to ask for forgiveness than for permission. The unis now help and trust us. But in some halls, you can still find some of our posters today.” Cameron says that this shows the beauty of Dunedin. “Students really get behind things like that, because students want to support students.” The Flatpack Co promises to deliver the bed on the day the students arrive in the new flat going directly from the manufacturer to the students. And the feedback they receive is very positive: Although they offer a no questions asked refund policy, only six people made use of that in the last year.“but that was only because they moved into a flat that already came fully furnished.” Angus and Cameron just finished studying and graduated and now run the Flatpack Co full-time. “We only employ students, everyone in our five people core team is 21 years old. We can relate to our audience because we are our audience,” Angus says. So far, Dunedin is their biggest market and the uptake in the Waikato isn’t as big. “Most University of Waikato students come from the Waikato and therefore have family around or take their own bed,” Cameron says. But that the boys hope to change as they eye the mass market. “We are in an expansion phase so that not only students but anyone anywhere in New Zealand can buy our beds. We want to be the biggest market in New Zealand,” Angus says. They are focused on selling online. “But maybe one day we may have a shop in High St in Sydney.” 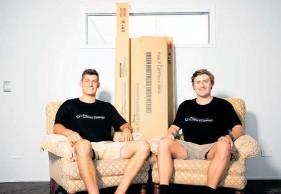 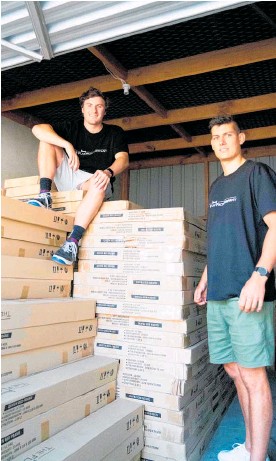