AIMS Games back after two years 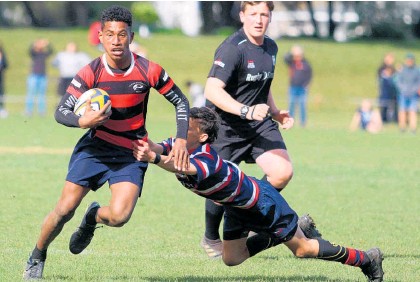 The Zespri AIMS Games is set to make a triumphant return after two years of pandemicrelated heartbreak. Registrations have now closed for the 2022 edition of the intermediateaged sporting tournament, with nearly 11,000 entries from 323 schools around New Zealand. This year’s tournament will run from September 3-9 with a whole new generation of young athletes competing in 23 sporting codes. “It’s incredibly heartening to see the response from schools and communities around New Zealand and it shows how much they’ve missed attending events like the Zespri AIMS Games,” says tournament director Kelly Schischka. “We’ve already equalled the number of schools who attended the 2018 tournament and we’re sitting only behind the 2019 event in terms of numbers. Not even two years of Covid-19 cancellations can dampen the enthusiasm for such an iconic part of the sporting calendar.” The 2019 tournament drew more than 25,000 athletes, supporters and officials to the Western Bay, injecting nearly $6.5 million into regional coffers, and contributing 74,787 visitor nights over the week. As well as the memories and camaraderie it creates for the competing athletes, it’s also a big deal for local businesses. “Our coastal Bay of Plenty visitor sector certainly noticed the Games’ absence during the past two years, so we’re really looking forward to the influx of visitors they will bring in this September,” says Tourism Bay of Plenty general manager Oscar Nathan. “The games are an important part of Tauranga’s identity — they were established here, and we’ve continued to host them ever since as we’ve witnessed this event’s exponential growth in popularity.” Among the codes, indoor cricket’s introduction to the games has met with immediate success, drawing 170 players from around the country, while rock climbing (175 climbers), swimming (441) and tennis (160) all have their biggest-ever fields. Hockey has moved from 11-aside and 6-a-side competitions to straight 7-a-side teams, enticing 1224 aspiring stick stars and making it the secondbiggest code, behind netball (1442 players). Basketball (1197), football (1120) and rugby (1044) also have more than 1000 competitors each, although football’s numbers don’t include the 510 Futsal players also coming. For many competitors, this will be their first experience of a multi-code sporting event, while it’s also the first year of Zespri’s involvement as the naming-rights partner. “This tournament continues to have a hugely positive impact on our young people, helping foster a lifelong love of sport and activity,” says Zespri’s head of global public affairs Michael Fox. “It fits in really well with our purpose at Zespri, by helping communities to thrive and teaching healthy habits to the next generation, as well as building personal connections between children and Factbox: their supporters from all over the country after two disrupted years.” The tournament is in its 19th year, after starting with 750 competitors in 2004, although this year will be the 17th edition because of Covid-19. It’s also a flagship event for Tauranga City Council, with the local authority’s manager of venues and events, Nelita Byrne, thrilled to see the tournament back up and running. “After a two year hiatus, we’ll be welcoming a whole new generation of rangatahi to beautiful Tauranga Moana this year,” she said. “These young athletes will get to experience the excitement of one of the biggest tournaments in Australasia and the manaakitanga of our community will make it a truly memorable week. “With Zespri on board as a naming sponsor, we know we can push our commitment to sustainable event practices even further. We can’t wait to announce our new initiative that will help athletes ‘give back’ to Tauranga’s environment, and our partnership with Bay of Plenty Regional Council means buses will once again be free for athletes travelling between venues and around Tauranga City.” The premier sporting event for 11, 12 and 13 year olds is a strategic partnership between Sport Bay of Plenty, Tauranga City Council and the four Western Bay of Plenty intermediate schools, supported by NZAIMS, ACC and Sport NZ.