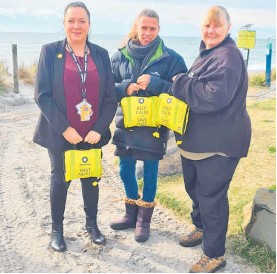 Who doesn’t love a walk on the beach? On Saturday there’s a chance to combine getting some exercise and fresh air with being a tidy Kiwi. Pukehina Beach resident Kirsty Whitaker has organised a community beach clean-up after deciding enough was enough when it came to rubbish on the beach. “Me and my partner went for a drive down the beach a few times and found some rubbish and I said ‘right, it’s about time we did something about this and get everyone else involved’,” she says. It’s the first time she has organised anything on this scale. “Previously I was a bar manager and had done little events in a bar, but this has gone one step further.” As soon as she floated the idea on Facebook, there was a good response. “It’s just the first year, but even if we only got as little as 20 people turn up, then that’s 20 more people than just me and my partner,” says Kirsty. “But I think from the interest on Facebook, there’s going to be a lot more than I’m expecting. I think it’s actually going to be quite big. Hopefully.” While the clean-up is scheduled to run from 10am-2pm, registration is from 9.30am. People who register will be in the draw for spot prizes that have been donated by businesses. “Also, the registration will give us a rough idea of how many people turn up so we can plan better next year if we do it again.” Headquarters Pukehina Fishing Club, where there will be a food truck and coffee cart. Once they are registered people are free to go to any part of the beach to pick up rubbish. There will be six quad bike riders. “They will be assigned a rough area. If people don’t want to carry their bag back, or if they find anything too heavy to lift or if they need clean gloves or new rubbish bags or a drink of water — the bike guys will be there for that.” Three of the quad bikes will have first aid kits that have been donated by Te Puke St John area committee. “And Pukehina first responders are going to have someone on site.” Western Bay of Plenty District Council have donated rubbish bags and gloves and the rubbish will be sorted into plastic, glass and rubbish for landfill. It will be removed by Coast Care BOP. Kirsty says while setting up the day has been a lot of work, it has been worth it. As well as cleaning up the beach, it is bringing awareness to the issue.