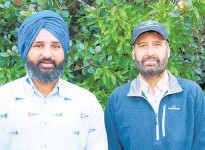 The district’s Sikh community has got behind Te Puke’s Matariki celebrations. The Bay of Plenty Sikh Society and Param Cheema, owner of Paengaroa Horticulture, have provided significant sponsorship for the event and, while they are by no means the only sponsors, their willingness to get on board demonstrates a desire to connect more with the local community. The sponsorship has specifically gone towards the educational programme taking place today, and the hangi that is being lifted tomorrow at the community celebration. Sikh Society secretary Lehmber Singh says the Sikh community has its own, similar, new year celebration in April — called Vaisakhi. Lehmber says he realised, talking to Ma¯ori people, there are strong similarities between the Sikh celebrations and the stories surrounding Vaisakhi and Matariki. He says he feels it is important for young people to understand Ma¯ori culture and Matariki. There is also a strong tradition of sharing food in Sikhism which is why Lehmber is happy some of the sponsorship will be used for the hangi. “Food brings people together,” he says. ”[We don’t want to] just stay in our own comfort zone, but come out of that and let other communities know what our cultural values and religious values are, what we are and what we stand for,” he says. He says he will be encouraging members of the Sikh community to go along to the community day tomorrow. Param says around 80 per cent of his workforce are Kiwis, many of them Ma¯ori, and he has sponsored the Maketu¯ Matariki Ball and a netball team. “In the past, we’ve had a good relationship with a lot of Ma¯ori families and I decided this [sponsorship] will help to create a stronger relationship.” He says he has found there is a need to get involved in the community “so they understand us better and so there isn’t any confusion about us”. “I’ve had some bad experiences, so it’s to remove that confusion and break down any walls and understand.” One of the Matariki festival organisers Kassie Ellis has worked with the Sikh community to build connections and she says sponsorship of the festival is part of that. “A key message from me, in terms of the Bay of Plenty Sikh Association and Param’s contribution to the event, is that we are extremely humbled and grateful for their contribution, and very pleased that Matariki can potentially just be a stepping stone in building those relationships moving forward and those connections in the community that need to happen. “We are such a diverse community now, there’s no reason for there to be certain boundaries — we all need to come together more.” Kassie says with the event becoming an expensive undertaking, she wanted to make the best use of the sponsorship. “There are key people coming in from the community to educate children and that is where [some of] the money is going and the hangi is very expensive in itself, and they have single-handedly covered all the food that needs to be bought, the utensils and everything.” That has enabled the hangi to be a fundraiser for all the local schools.