Acombination of global and localised factors is creating a “very tight” global beef cattle market — with strong demand and record high prices in many regions throughout the world. This is coinciding with a fundamental shift in international market dynamics, Rabobank says in a newly released report. In its Q2 Beef Quarterly, the agribusiness banking specialist says the global beef market is so tight that localised disruptions — including droughts and increases in consumer demand in individual countries or regions — are now exerting a much more “dramatic impact” on trade. “Given the growth in beef demand and global trade, pressures created in the system now means what may once have been considered slightly abnormal seasonal conditions are now causing major shifts to markets.” Rabobank senior animal proteins analyst Angus Gidley-baird, a coauthor of the report, expects the local drivers fuelling high prices in individual countries — such as a reopening of the food service sector in the US and post-drought herd rebuilding in Australia — will eventually correct and cause an adjustment in prices. “However, with the tight global New Zealand farmgate beef prices nudged upwards in April and are expected to have held steady during May. Right: Rabobank senior animal proteins analyst Angus Gidley-baird. supply situation — underpinned by Chinese demand which is expected to remain firm — we believe the global market has seen a fundamental step up,” he said. The report says the main localised drivers around the world affecting the global beef market include strong demand-driven beef prices in the US, stock rebuilding in Australia, seasonal delays to the Brazilian cattle slaughter and reduced supply in Europe. For the US, Mr Gidley-baird said, the country’s beef sector was squarely in a demand-driven market, with April 2021 wholesale prices 18.5 per cent higher than the same time in 2019 (providing a comparison before 2020’s Covid-related supply disruptions and panic buying), while retail prices were 11.5 per cent higher. “This is the result of a number of factors,” he said, “including renewed competition between foodservice and retail triggered by the reopening US economy, combined with grilling season, all-time high consumer incomes and strong exports.” In Australia, Mr Gidley Baird said, successive years of drought and large livestock liquidation have resulted in the beef cattle herd being at its lowest point in more than 30 years. “With stock numbers so low and seasonal conditions favourable over recent months, we’ve seen intense competition among producers looking to restock properties and generate value out of increased pasture production,” he said. For Brazil, a delay in seasonal rainfall had seen lower cattle supplies available, forcing processors to push up prices to keep supply flowing, particularly given the demand from the import-hungry Chinese market. And cattle supplies across the EU have fallen, reflecting low profitability seen in the sector there last year due to the impacts of Covid. “EU beef carcass prices have been firming since quarter four 2020, with the average EU beef carcass price currently up 7 per cent on the same period last year,” Mr Gidley-baird said. Meanwhile in China, the report says, slow growth in domestic beef production unable to keep up with the strong local growth in consumption — triggered by substituting beef for pork during the outbreak of African swine fever — had led to rising beef imports in past years. “While part of the beef consumed as a substitute for pork will shift back when pork production recovers, we expect strong Chinese beef demand to remain as new markets have been established,” Mr Gidley-baird said. “This will continue to drive Chinese beef imports from the global market.” The report says NZ farmgate beef prices nudged upwards in April and are expected to hold steady during May, with the reduced competition from Australia assisting New Zealand product in finding a home with the change in seasons in the US. “US demand for manufacturing beef has lifted in line with the changing of the seasons, with some warmer weather bringing out the barbecues, along with the reopening of eateries, as vaccinations become more widespread and restrictions ease in some states,” Mr Gidley-baird said. “And we expect these dynamics will continue over the next month, helping to maintain New Zealand farmgate prices.” He said recent news out of Argentina may also benefit Kiwi producers. “Argentina’s recent decision to cease beef exports, together with low Australian supplies, does create the potential for further upside in New Zealand beef prices — especially given New Zealand is well positioned to supply chilled beef to China,” he said. The report says NZ beef exports rose 5 per cent to 266,875 metric tonnes for the seven months to April. “This was largely driven by increased volumes to China and the US — up 4 per cent and 12 per cent respectively — compared to the same period last year. Despite this lift in volume, the value of exports fell just over 9 per cent over this period, with a much stronger New Zealand dollar contributing to some of this fall.” 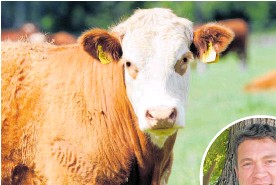