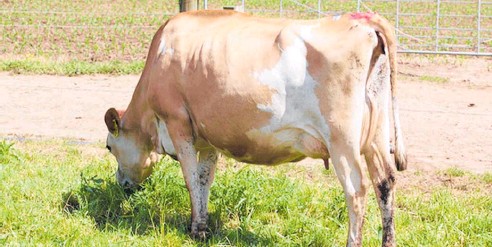 Acow that sold for a whopping $55,000 has toppled a 50-year record to become New Zealand’s highest priced single dairy cow. The rising 3-year-old in-calf Jersey was sold as part of an April dairy herd dispersal sale of 265 cows and 85 incalf heifers. The herd belonged to Dick and Faye Post, who farm at Tauwhare on the outskirts of Hamilton. Bidding started at $10,000 and lasted for around 10 minutes, Dick Post said. He knew something special was happening when the bids “kept creeping up” from $25,000 to $35,000. “I thought holy heck! What’s going on?” he told The Country Sport Breakfast’s Brian Kelly. “At 40 [I thought] that’ll just about stop it and then heck, we were up to 50!” The herd was offered as an onlineonly sale through PGG Wrightson national dairy genetics co-ordinator Andrew Reyland. It was conducted over three days via PGG Wrightson’s online platform bidr, in conjunction with Brian Robinson Livestock. The sale attracted purchasers from Kaitaia to Invercargill, with 131 unique buyers tuning in to bidr over the sale’s three-day duration. An Otago farmer submitted the successful bid, also buying the record-breaker’s dam for $23,100. Meanwhile, a half-sister, from the same dam, fetched $23,400. “The line had slightly different genetics, which made it more interesting to buyers,” Andres said. “Sired by an A2 bull who transmits high components, the record-breaker has excellent production indexes on her maternal line and recorded an udder score of 8-8.” In total, the Posts’ in-calf heifers averaged $3347, while the cows averaged $3240. The line was a testament to the hard work and care the Posts had put into their cows over the years. The cows produced an average of more than 400kg annually of milk solids, which equated to more than 1900kg of milk solids per hectare. “Eventually the cream comes to the top in this business,” Dick said. The couple had now retired after over 40 years of farming but still kept busy with a smaller “clone” of their original farm, he said. Dick remained philosophical about his decision. “It’s a young man’s game and I’m not a young fella any more.” ■