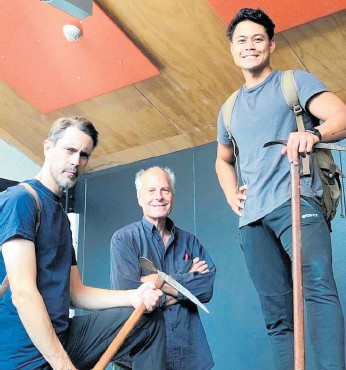 On May 29, 1953, the world awoke to the news that the tallest mountain in the world had finally been conquered — a Nepalese Sherpa and a New Zealand beekeeper beating a who’s who of the world’s mountaineering elite to the top. Now, exactly 69 years later, Hamiltonians can experience that famous moment for themselves in a new work of theatre, The Sherpa & the Beekeeper — Summit on Everest. Written and directed by Matt Kambic, a Raglan local with an extensive CV in a variety of creative arenas, this play is the culmination of a lifetime of fascination with the Everest story. “The story of the first successful summiting of Mount Everest is one of the world’s most wellknown human adventures,” says Kambic. “The mountain, and the two men who laboured up its slopes in May of 1953, fused into a singular cultural shockwave, roaring like an avalanche over the people and territories below, and rushing beyond into an astounded world.” Kambic’s ongoing interest in the mountain had already manifested itself in the writing and publishing of a science-fiction novel, Everest Rising. So when the opportunity arose to develop a stage play through The Meteor Theatre’s Boil-up programme — a creative development programme for local theatre — Kambic already knew that he wanted to explore some of the personal and political repercussions of one of the most iconic moments of the 20th century. Act one opens in 1953 with Sherpa Tenzing Norgay and Sir Edmund Hillary on a replica of the Mt Everest summit, then in the following two acts they explore their achievement and its consequences in a future-envisioned ‘summit’ of their own. And there is plenty to explore — the consequences of fame; the impact of nationalism, racism, and colonialism; and the long term effects — both good and bad — on the local people. Bringing a theatre production to the stage isn’t easy at the best of times, but this one had the added challenge of navigating through Covid, with numerous auditions and rehearsals having to be delayed or moved online. “Despite all the challenges, we’ve had such great support from the creative community in the Waikato,” says Kambic. “We’ve had generous funding from Creative Waikato, The Meteor team have been fantastic all the way through, The Place has helped out with rehearsal space. And of course we were so thrilled to find two such high calibre actors — Jericho Nicodemus as Tenzing and Cameron Smith as Hillary — who have really brought the play to life.” The five-show season opens at the Meteor Theatre in Hamilton on May 25, and runs through to a Sunday matinee on May 29. Tickets are available through themeteor. co.nz.