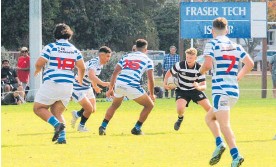 Pirongia have plenty of positives to take away from a hard-fought win against Suburbs on a fine Saturday afternoon in Waikato Division 1 rugby. Played on rock-hard ground at Flagstaff Park, many of the frustrations from the previous week’s game were overcome, as several chances were converted into points this time round, as the visiting Pirongia team came out victors 12-10. Superbly led by captain Kayden Moorfield, the mountain men showed some tenacious defence. Suburbs dominated early territory but couldn’t break through as some superb cover defence, often led by first five-eighth Jack Wade, chopped down threatening attackers out wide. In the close channels the tight forwards always held their own, blocking the big Suburbs forwards making the advantage line. After spending the first 20 minutes defending in their own half Pirongia conceded a penalty and from a handy position, Suburbs kicked the penalty to take a 3-0 lead. During this period came a bizarre refereeing decision when after showing a Suburbs player a yellow card he also awarded them a penalty to restart play. From the kick-off, the visitors worked their way up field and after a series of pick and go’s Pirongia were awarded a penalty out front which should have been an easy three points. But prop Gordon Fullerton being very aware the Suburbs defenders were expecting just that, took a quick tap and drove over adjacent to the posts to give Devante Waho an easy conversion and a 7-3 lead. Suburbs had the final say in the half when after a sustained period of attack and a number of phases, the home side scored a converted try and took a 10-7 lead into the break. That only fired up the mountain men who came out with renewed determination into the second half to overcome any obstacles that the home team may put in front of them. They started to get their formations working and everyone stepped up and was willing to carry the ball hard and strong as they slowly wore the home side down. Eventually with 15 minutes to go flanker Andrew Charleston saw some space from about 20 minutes out which he took and ran round the last defender to score near the posts to give the mountain men a 12-10 lead. Waho’s conversion hit the posts from a handy angle. At times an intense last 15 minutes was played out with the mountain men holding on for the win. It was a day of solid performances from all the Pirongia players. From loosehead prop Cody Mortensen