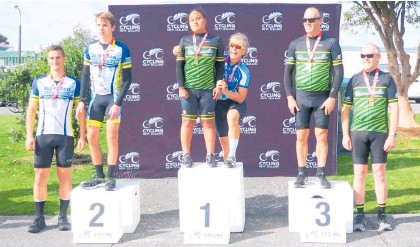 Te Awamutu’s Unity Collins (Morrinsville Wheelers Cycling Club) and pilot Vicki Fleming took away a gold and a bronze medal at the Elite Para Cycling Championships held in Hokitika, West Coast from April 22-24. The tandem cyclists placed first in the Para Cycling Road Race (65km) with a final time of 1:54:21 while they placed third in the Para Cycling Time Trial (25.2km) with a final time of 40:59. The road race was a thrilling watch on the scenic but deceptively tough course. “It was a fantastic achievement. Unity has worked so hard over the last year. Consistently doing training and working out,” says Vicki. “She’s made huge gains and it really helps to be able to get an amazing result at the end of that work, that you can see the justification for the work that you’ve put in.” Unity is visually-impaired and made the switch from competitive swimming to cycling in February 2021. Para cyclists who have a visual impairment race on a tandem bicycle with a sighted cyclist (pilot) at the front. Their race included athletes with a range of visual impairment from a low visual acuity (less than 6/60) and/ or a visual field of less than 20 degrees through to athletes with no vision. Two years ago, Unity got invited to Cambridge’s Grassroots Trust Velodrome to see if she would enjoy cycling — she did and that’s where she met pilot Vicki. “Cycling is a lot of fun; I really enjoy it. Just meeting new people and also my pilot Vicki,” says Unity. “[To win the Para Cycling Road Race] was actually really exciting. We started giving each other hugs.” Unity and Vicki have been in several races together including the Hampton Downs Activ8 Cycling Event (twice). Early last month, the duo did a time trial and a road race with Counties Manukau Cycling Club, at Aka Aka near Waiuku, where they won both events. “It’s a great journey and I feel very privileged to work with Unity,” says Vicki. “She’s always smiling and joking and that helps us ride together. We’re a good team.” Unity says she hopes to get up to another level in cycling and the pair hope to head over to Australia to race later this year.