TA proving their worth despite loss 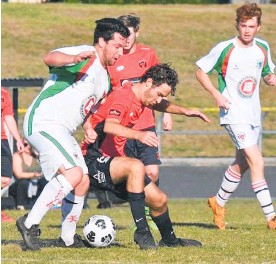 Junior football kicked off last weekend but on Friday night, 80 first kickers headed to 51 Mahoe St to collect their free first kicks kit thanks to Expleo. As anyone reading will note, you create a memory like that for a child, they will never forget it. It is hoped the relationship the club has built with Expleo will continue for years to come. Te Awamutu AFC Team Townsend Premiership Team went down 5-0 in O¯ tu¯ moetai last weekend. Travelling over has its own issues, but some basics let the boys down and this is where the games are set to be won. O¯tu¯moetai played to the advantages of the long grass where TA did not. As discussed after the match, it’s apparent that Te Awamutu are proving their worth in the league, and every club is on notice that it’s a club that’s alive and well and growing, growth and culture being the key points. The boys will definitely be calling on the services of SOAR physio this week and noted is the recent addition to the squad of Dr Doyle, proving her value despite being on crutches herself, as she was called to service on five occasions. The team moves forward to regroup and head into a Chatham Cup round one against Metro with $1000 up for grabs. Kick-off is 2pm at The Stadium, Armstrong Ave, on Saturday. The Team Townsend Tall Poppy Reserves had regathered themselves after the previous week. In a twist, the fixture ended up being held in Te Awamutu. Captain Lawrence Chaney noting that everyone appeared to be on the same page after some midweek discussions around key areas we were lacking in. Team management’s Euan Mcleod pointed out a great effort from everyone as they ran themselves around for the entire 90, competed for the 50/50s, put in tackles and were generally right up for it. Josh Fitzpatrick was absolute quality throughout the game and showed he is a great player. four new additions to the squad helped get the team through — Curt Pegler, Ben Young, Keegan Orr and Ethan Omundsen. Ben Grainger and Richie Bell were also noted for their performances. The team continues to build moving into a game away at Claudelands. The J&J Fencing and Construction men’s Division 4 side was the winner in a seven-goal thriller at Anchor Park. Only 30 seconds into the game, Scott Surtees saw the Tokoroa keeper off his line and from 40m sent a long shot over the keeper and into the net. Flynn Prutton calmly converted a penalty kick before Tokoroa came storming back with three quick goals near the end of the half to take a 3-2 lead. Cody Jones then pounced on a defensive mistake to score his side’s third goal. The teams went to the break 3-3. In a cagey second half, TA slowly took control of the match and their continued pressure paid off when, after a goalmouth scramble, Gabe Hoete rose above the defence to head home the game-winning goal. Player of the day Surtees scored and set up goals while controlling the play on the right side of midfield. This week the team hosts Unicol at Anchor Park, 2.45pm kick-off. The TA Storyteller Bar and Eatery Over-35s men’s team continued its winning start to the year with a third win from three games. The 5-0 away win over old foes Northern United Seniles was well deserved, and meant the team had scored 16 goals over the start of the campaign, while conceding only three in total. Solid keeper Andy Townsend was well shielded by veteran centre backs Chris Fitzpatrick, playing like he had two right feet, and Hasmukh Ratnam, allowing the energetic midfield duo of Blerim Budlla, and Chris Cousins to concentrate on feeding quality balls to the pacey forwards. Early goals from Daniel van Schie and Budlla were then added to by quicksilver replacements Emerson de Souza and Andy Maunsell, with a highlight of the day being finally a goal for striker Simon Waite, despite suffering all season with chronic jet lag. The next game will be an exciting 7pm Friday home game under lights at the stadium, where the team will look to continue its good form over Hamilton powerhouse Claudelands Rovers. The Edmonds Judd Women’s Team are a fantastic collection of women into only their third game. The addition of Angela HammondTutty in nets, Nicole Grayson (player of the day) and Arahia Roberts really allowed the team to continue to build some great foundations. Each week a task had been set and they took last week’s on board, going up 2-0 in the first 10 minutes, with four or five more going wide. These moments proved costly later on as Morrinsville released their firepower that had several one on ones with Hammond-Tutty able to stop half and the other half in the net. The ladies never stopped and in the last 10 minutes were unlucky on several occasions not to get several more with Grayson taking Morrinsville’s key player out of the game the best she could. The ladies head to Club Waipa this week with a team-building bye coming up on Sunday.