Hunt on for Bob the sheep

Much more than just a sheep say distraught family 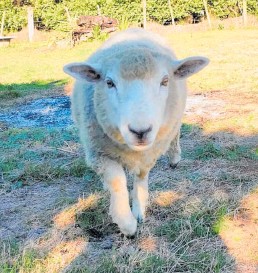 Beloved family pet sheep, Bob, has been reported missing from his paddock on Herbert St in Kihikihi, on the afternoon of Mother’s Day. At this stage, we are unsure if he went missing on Saturday or Sunday morning. Owner Megan Corin says, “It is extremely out of character for Bob to walk off and we are unsure how he even got out of this paddock. “We are devastated and heartbroken. No words can explain it.” Bob will be turning a year old in August of this year and was adopted so her son Jimmy could participate in his school agriculture day. “My friend Lorraine offered us a 4-day-old lamb to raise and train. Without fully thinking it through I jumped at the chance and said yes before I could run it past my husband Mark. We collected him that evening and never looked back. “Jimmy’s nickname with his friends is JimBob so he named him Bob so they could be Jim and Bob. Also, Lorraine’s son is called Robert so Jimmy also used Bob after him.” Bob quickly became a muchloved member of the family, who isn’t aware that he’s a sheep, after being raised indoors alongside two dogs. “He was fed milk bottles in my arms and rocked to sleep like a newborn baby. As he got bigger and heavier he use to curl up in my lap to sleep. When he got bigger again he would eat his food out of a bowl with the dogs and sleep with them in their kennel. “Bob would spend his days with our son playing outside, or in his bedroom just hanging out together. They were the best of friends. He kept us all very entertained during the lockdowns. He is very gentle and sweet,” says Megan. Bob may have been spotted by locals when he would go on walks around the family’s block or around the Kihikihi Domain. For the last couple of months, Bob has been living at Megan’s parents’ house, which is right around the corner. They have a small paddock and room for him to grow, as he was getting too big to be living in the lounge and backyard. Bob grew used to spending his days hanging out with Megan’s dad or having pats from the neighbourhood. “When I went to visit I would lie in the paddock with him while feeding him potato chips, which are his favourites. He knows the sound of a rustling chip packet.” The family hope he has possibly gone into the neighbour’s property, as they own a bit of farmland. If this is the case, he could have made his way into large paddocks behind Herbert St/Hairini Rd towards the back of Puahue Rd. If spotted, Bob will acknowledge you if you calmly call his name or if you rustle a packet of potato chips. Megan says, “He will look up and give quite a low baa. He is extremely handsome but is currently looking quite dirty from scratching up against things. He also has two hard spots on his forehead. “I’m sure he would come straight up to you. He is used to having a collar and lead and being walked.” It would mean the absolute world to the family if he was found safe and sound as they are attached to him, so much so that it feels as if they have lost a family member. “Having him back also means I wouldn’t be sobbing myself to sleep,” says Megan. Megan says, “I know many will be thinking ‘he’s just a sheep’ but to us, he isn’t, he is unique. He is a big part of our family and those who know me understand how devastating this is. “We pray he hasn’t been stolen, and if he has we just ask for him to be please be returned, no questions will be asked. Please help us get our boy back.” The family would also like to say a big thank you to everyone who shared their Facebook post and for all the lovely kind words and gestures/offers. They are so blown away and humbled at the community’s kindness.