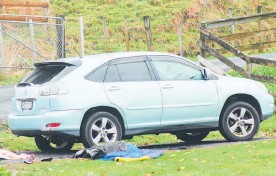 DNA from a blood-splattered machete and a boot print left on the front door of a Ka¯ whia home, are all linked back to an accused man allegedly involved in a fatal home invasion. Grayson Toilolo is alleged to have gone to the home with three others, including Faalili Moleli Fauatea, 23, who was shot dead by homeowner Orren Williams as they tried to flee the Harbour Rd house on June 6, 2019. Toilolo’s co-accused, Shaun Te Kanawa and Joe Tumaialu, earlier pleaded guilty and were sentenced for their part in the incident. Williams was found not guilty of Fauatea’s murder by a jury in September 2020. Opening the crown case in the Hamilton District Court, prosecutor Tom Sutcliffe told the jury the group of four knocked on Williams’ door about 3am. Already up as he was looking for an inhaler for his child, Williams opened the door only to be confronted by the group wearing some sort of disguise on their faces. “Sensing danger, Mr Williams attempted to shut the door and retreat inside the house. “The door was kicked in and a group of men poured into the house down the hallway.” The noise awoke Taryn Williams who got up to see what the commotion was about and a “chaotic scene” erupted as one of the group was armed with a gun, another a machete. The intruders attempted to get the situation under control, assaulting Mrs Williams and leaving her in the foetal position on the floor. “But Mr Williams proved more of a challenge and he fought and he managed to escape out through the washroom door, closely followed by at least one of the intruders.” While the intruders had the attention of Orren Williams, Taryn Williams got up, gathered her children, and lowered them out of a bedroom window before running to safety across a paddock into the darkness. As that was happening, Orren Williams ripped his gun cabinet off its hinges with his bare hands and armed himself with a .223 semiautomatic hunting rifle. The intruders decided to leave, heading back to their car parked partway down the driveway. “Mr Williams, fearing that these people would return, opened fire on their vehicle and he shot all four of them.” The injured group then drove off before coming to a stop at the nearby Hauturu School, knocking on the principal’s residence for help. “It’s likely that the defence case here is he was not one of the men who entered the home. “The Crown say he was and that he participated in the violence.” Sutcliffe explained the law around where two or more people form a common intention with an unlawful purpose, each of them is still a party to any offence that is committed. “If you get together with a group of people in the dead of night and you arm yourselves with at least a gun and a machete, you kick in a door and storm a house and try and subdue those people and assault them, then you are all guilty of those offences together.” The Crown alleged Toilolo was one of the four who entered the home. A forensic scientist will give evidence of how he discovered a distinctive footprint from a shoe worn by Toilolo. All the four men had their footwear taken from them and examined when they were admitted to Waikato Hospital for treatment. Also, a machete used to cut and injure Orren Williams was found in the vehicle the group had travelled in with Toilolo’s DNA on it, Sutcliffe said. The shotgun belonging to the group, discovered in the shot-out car, was a 12-gauge shotgun and was loaded and “ready to fire”. Toilolo, represented by Charles and Amanda Bean, denies charges of aggravated burglary, commission of a crime with a firearm, wounding with intent to cause grievous bodily harm, injuring with intent to injure, unlawful possession of ammunition and unlawful possession of a firearm. The trial is set down for five days and 23 witnesses will be called. It is being overseen by Judge Jonathon Down.