It came down to a final between Generation Homes Lake Taupo¯ Cricket Club and Te Puke Cricket Club when the two teams met in the final of the 3rd Cricket Express Lake Taupo¯ Spring Invitational after qualifying for the title decider in the three rounds of preliminary play. Lake Taupo¯ won the toss and chose to bat first in a battle that would ensure a new winner of this hotlycontested annual event, after two time defending champions Taradale Cricket Club were reduced to fourth place earlier in the afternoon. Lake Taupo¯ opener and tournament MVP Caleb Bate lit up the final on his way to 108 off 64 balls, as Lake Taupo¯ posted 163 for 6 off their 20 overs. In response, Ben Vyer smashed 6 sixes in his 59 and a fantastic 31 off 12 balls late in the innings by Josh Earle secured the win for Te Puke with an over to spare. The tournament hosts reached the tournament decider with two wins from three matches in the preliminary completion. After a first round loss to Te Puke by 21 runs, Lake Taupo¯ then defeated Taradale by six runs in a close contest on Saturday afternoon. Caleb Bate staked his claim for the MVP award early in the tournament, belting 88 runs in his side’s total of 154 for 7. After Otumoetai Cadets followed up a tough first round loss to Taradale with a win over Te Puke on Saturday afternoon, the final round of pool play would be a virtual semifinal for all teams, after everyone had posted a one from two record on day one. Day two on Sunday, October 3 started with a mammoth win for the Generation Homes Lake Taupo¯ team by 100 runs over the Element IMF Otumoetai Cadets. AJ How and John Dolan both took three wickets each for Lake Taupo¯ and Michael Mitchell top scored with 53 not out. On the other ground, The Flying Mullet Te Puke side posted an impressive 201/4 score for Taradale to chase down. Blair McKenzie continued his form with 79 not out, with Iman Singh joining him later in the innings for a quick 28 off 11 balls. The Te Puke bowlers shared the spoils, with five of them coming away with two wickets each and restricting Taradale to 124. In the battle for third and fourth, the Bayleys Taradale premiers won the toss and decided to bat against the Element IMF Otumoetai Cadets. Taradale couldn’t get going with Steven Phillips top scoring with 41 off 55 balls and with two run outs late in the innings, only managed to post 124/5. The Otumoetai top order came out swinging, posting a partnership of 95 (James McCabe 43 and Spencer Wills 52). They chased down Taradale’s score in 16.4 overs. 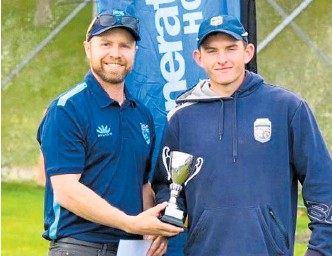