Taupo¯ teens to get on their bikes to Europe

Two young Taupo¯ sportspeople with dreams of making it big on the international scene are striking out into the unknown next year to try their luck in Europe. National under-19 women’s crosscountry mountain biking champion Mia Cameron, 16, and fellow rider James Officer, 16, who is ranked fourth in his national age group and 64th internationally, are both heading to Europe in 2022 to take on the ultracompetitive European mountain bike racing scene. For both, it will be a chance to gain valuable offshore racing experience as well as gauge where they stand in relation to other international riders their own age. The pair, both students at Taupo¯nui-a-Tia College and members of Taupo¯ Mountain Bike Club, were accepted to race with the Kiwi Mountain Bike Collective, a privately organised group of 10 young New Zealand mountain bikers from under19 to Elite, who will spend between two and five months racing in Europe and possibly also North America during the Northern Hemisphere summer. The group has been set up by Scott Woods, father of Motueka-based rider Ethan Woods, who planned to take his son over to race and decided to extend the opportunity to other talented young riders too. The trip is being independently organised, although there may be bikers from the Mountain Bike New Zealand Academy also competing at some races. Both James and Mia heard about the Kiwi Mountain Bike Collective opportunity through their Rotoruabased coach Mark “Cabin” Leishman of Black Dirt Collective. They had to go through an application process and a Zoom interview before acceptance. The main criteria was race results, although consideration was also given to how the riders would fit in with a group that would be living, racing, training and travelling together for up to five months. James will leave in May and be away for five months. He expects to race in Mercedes-Benz UCI Mountain Bike World Cup races in Germany, the Czech Republic, Austria, Andorra, Italy and possibly the USA and Canada as well. Mia leaves at the end of June and will compete at UCI World Cup races in Switzerland, Andorra and Italy and national and local races in Switzerland, Italy and France. Both will compete in the under-19 junior division and aim to be selected for the penultimate race of the trip, the UCI Mountain Bike World Championships in Les Gets, France, from August 24 to 28. The World Cup circuit races are typically between 20 to 25km in length and last for an hour to 90 minutes. They usually feature steep climbs and tight, technical sections with roots and rocks to test the riders’ skill. The students will be in Year 13 next year and hope to get ahead on their schoolwork before going away. However, both would ultimately like to be professional riders and this trip represents a significant step towards their goal, with the opportunity to race against bigger fields and see how they perform against riders in the same age group. “Just to give it a go really,” says James. “Gain some experience and see if there’s a future and check out the competition.” Mia says she’s excited to experience racing life in Europe as well as get to know others on the circuit. “Meet new people, make connections with bigger teams and stuff, so we can get back over there in future years.” She often rides against the same field of only four to six other young women in her age group so the trip will be an opportunity to see how she ranks. “It’s a small field of females over here so I’m excited for bigger fields, different competitors. I’m just looking forward to all of it.” But it’s not coming easy, or cheaply. With Talley’s on board as main sponsor some costs, including race fees, accommodation and transport are covered but the pair still have to raise a significant amount of money to cover their airfares, food and spending money. Mia will need between $15,000 and $20,000 and James at least another $10,000 more. Both already have part-time jobs. They already have some sponsorship — James has R-line electrolytes and Nu-Klear Products and Mia has Pivot bicycles and Pack ‘n Pedal Taupo¯. Both are also brand ambassadors for apparel makers Green Monkey. Their parents are organising fundraisers to try to help the pair get to Europe. They are running a firewood fundraiser and planning a silent auction evening, with donations of goods or services gratefully received. ■ To buy firewood or donate to the auction phone or text 027 268 2958. 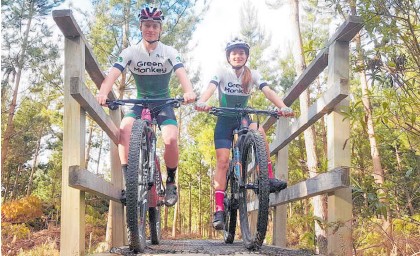