Inglewood’s new mini-putt course is open for tee-off. The course had its grand opening on Friday evening, with sponsors, helpers, and New Plymouth District Mayor Neil Holdom invited to be the first to try out the new attraction. Inglewood Mini Golf Charitable Trust chairman Graham Robinson says the $400,000 project was announced in 2017. “The Inglewood Lions Club had the idea to provide something exciting for people to do. The trust was then formed to handle construction, fundraising and to run the complex.” The project was funded by community groups, organisations and businesses. The building work, besides the roofing, was done by volunteers. “The Taranaki Electricity Trust gave us a total of $300,000 for the roof and the course. The New Zealand Lions Trust contributed $45,000 towards the course and kiosk. Taranaki Civil is a big contributor to the project by putting the metal down so we could start building and connecting our sewage and stormwater free of charge. They are an outstanding community-minded group. We’ve had so many people help and without them, this wouldn’t have been possible.” The course incorporates Inglewood features such as Taranaki maunga, the old railway station, and the Cue Theatre. “We wanted the course to represent Inglewood and the community.” Graham says the trust is happy the attraction is open for the town. “It’s been quite a process and we’ve had a number of delays due to Covid-19, but we’ve gotten there in the end. I’m really stoked with how it looks. We’re so thankful for the help we’ve received.” He says the trust has received positive feedback about the attraction. “Leading up to the opening I’d have a number of phone calls asking when the course would be open and I’m happy to say that it is.” New Plymouth District mayor Neil Holdom says the course is a great asset to Inglewood. “I think it’s really good to have a hub where there is a mini-putt course, a swimming pool, skatepark, and a park. There’s something for everyone. The Inglewood community have rolled up their sleeves and done a great job of making this happen.” The Inglewood mini-putt course is open 10am-5pm seven days a week during the school holiday. It then moves back to Fridays, Saturday and Sunday. $10 for adults and $5 for 12-year-olds and under. 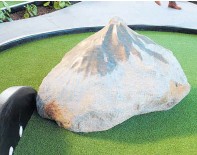