South Taranaki High School students have showed their skills at the Central Robotics competition. Ha¯ wera High School was one of 16 teams in the combined VEX Robotics and Vex IQ challenge competition at Palmerston North. The competition was the first event of the season. The Ha¯ wera team, alongside St Peter’s College in Palmerston North, took out top place in the Vex Robotics Tipping point competition. Two teams form an alliance and compete in matches. The object of the game is to get a higher score than the opposing alliance by scoring rings, moving mobile goals to alliance zones, and by elevating on platforms at the end of a match. The two teams won the finals. Ha¯ wera High School teacher Grant Collie says the teams are pleased with the results. “Both teams worked really well together. It’s a fantastic result.” Central Robotics vice-chairman Stephan Van Haren says the competitions are a great learning experience. “The teams apply technical skills by designing and building robots as well as using team work to collaborate with other teams.” Ha¯ wera High School Year 13 student Cullun Wallis says the competitions are beneficial. “It’s a great way to learn and reinforce my knowledge of Stem subjects. “This is great for my education as I can apply my classroom knowledge from physics, calculus, and digital programming into a constructive medium where I can play around with the concepts related to the theory and use them to gain a competitive edge over the competition.” He says the competition gives participants the opportunity to see the design process turn into reality. 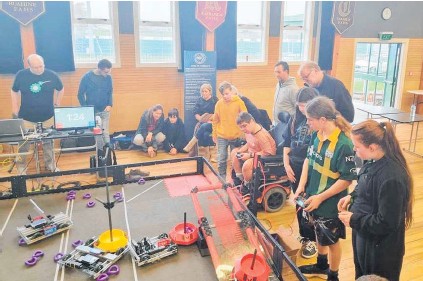