Junior chefs cooked up a storm last week for a cooking competition. Tu¯taki staff held the cooking competition as part of their school holiday programme. The group was split into three teams with an adult to supervise and help. Each team had a box of ingredients they had to use to create delicious and tasty meals, says Tu¯ taki operations manager Kim Marsh. “We’ve done cooking activities in the past and they’ve always been a hit. This time we wanted to introduce a competitive element so the children made meals to be judged by special guests.” The teams were made up of children from 8 to 14 years old, she says. “It’s a great way for the kids to meet people from other schools.” Cody Yearbury (12) and Taylen Marsh (8) enjoyed making Nutella scrolls for the challenge. Taylen says he liked using all the different ingredients. “We made the scrolls, mini pizzas, Mac n Cheese, and other dishes. It was good to use the different flavours. I really like cooking.” Cody is looking forward to cooking the delicious meals at home. “I’ve learnt a lot of new skills that I’ll be able to use when I cook at home.” Once the kids had made their meals, they were judged by Stratford District mayor Neil Volzke and Shelly Frank. Neil says he was impressed with the dishes. “They did an awesome job of using all their ingredients. The dishes were presented beautifully and the food tasted good.” Sophia Dettling (9) was part of the winning team. “I really liked winning the competition and knowing that the Stratford mayor liked our food.” See next week’s Kids Pages for one of the winning recipes. 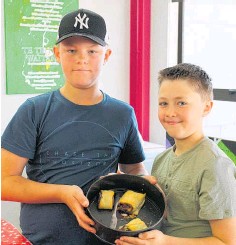