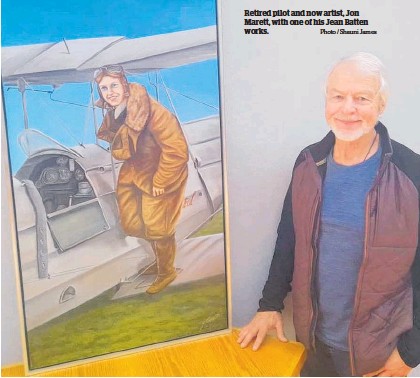 Retired pilot and now artist, Jonathan Marett, was inspired to chronicle the life and accomplishments of Kiwi icon Jean Batten, and his work will be on display here in Rotorua. This collection of 18 works, created over the past several years, pays tribute to this aviatrix’s extraordinary skills, accomplishments and dogged determination. Capturing Jeans’ life and historymaking, record-breaking solo flights, these artworks convey insights as to what she may have seen and experienced during the long solo flights she made. Jean Batten was born in Rotorua in 1909 and died in Majorca in 1982. She set many solo flight world records, principally en route between England, Australia and New Zealand. Also, notably, from England to South America. A lifetime passion for flying had Jon flying with the New Zealand Army, the Royal New Zealand Air Force and Air New Zealand. Upon retiring, he was able to pursue his other passion — art. He works with all forms of painting and drawing media, and this collection includes paintings using oil, watercolours, charcoal, pastels, mixed media and ink. Jon says there were a number of things that inspired him with this collection, and one included reading Fiona Kidman’s historical novel on Jean Batten. “Fiona tried to fill in a lot of gaps, but also when you look at the pictorial record of what she’s [Jean] done they are mostly old black-and-white photos . . . an awful lot happened in her life that you can portray pictorially.” Also, from his early days of flying he knows the struggle of trying to do things such as navigate, map read and keep planes airborne through the likes of storms, so was in awe of what she had achieved, he says. Jon says the primary aim of the Jean Batten collection is to hopefully motivate and inspire young people, especially young women. “This is a woman with no money who took herself to England, learned to fly and achieved so much. “This is what you can do if you set a goal and go for it.” He says it is mindblowing being able to display his collection in the city where Jean was born. “I feel very humbled about it. She was born a couple hundred metres from here and to have the collection in front of Rotorua and Te Arawa people is fabulous.” The official opening of the exhibition is this evening at the Rotorua Lakes Council Galleria. ● What: A Tribute to Jean Batten ● When: Monday, June 27 to Tuesday, November 1 ● Where: Rotorua Lakes Council Galleria. The Galleria is open Monday–friday from 8am to 5pm. ● Free