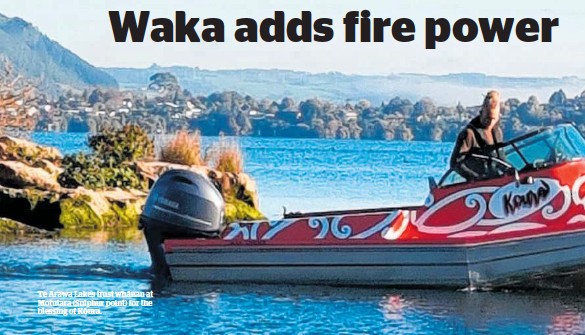 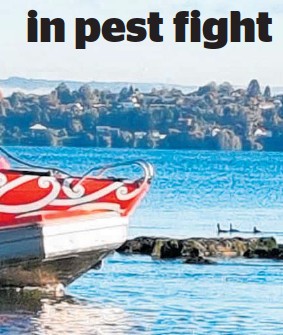 Koura is the latest addition to the Te Arawa Lakes Trust arsenal in the neverending campaign to protect the taonga species against invasive pests in our lakes and other waterways.te Arawa Lakes Trust (TALT) biosecurity manager William Anaru is proud that Koura, coloured kōkōwai red and covered in Mangopare kōwhaiwhai will be the first in a series of Te Arawa Lakes Trust commercial waka to be named after a freshwater taonga. Early on a sunny morning at Motutara (Sulphur Point) last week a simple karakia was performed to launch this latest initiative in TALT’S Mahi. Later, after most of the gathering had dispersed, William and TALT lead diver Corey O’neill put Koura through her paces. She passed with flying colours. Having their own waka means TALT are not reliant on friends or whanau for vessels. Being able to do more work means more jobs will be available. Already TALT has been a successful player in the Jobs for Nature programme and is always on the lookout to create more. Its role in protecting freshwater taonga is set out in legislation. Kōura or freshwater crayfish are one of six freshwater taonga species protected under the Te Arawa Lakes (Fisheries) Bylaw which was introduced in 2020 to help protect and replenish taonga species across Rotoehu, Rotomā, Rotorua, kataina, Rotoiti, kareka, Rerewhakaaitu, Tarawera, Rotomahana, Tikitapu, Ngāhewa, Tutaeīnanga, Ngāpouri and karo. “Operationally our waka will be used to carry out monitoring and biosecurity work for the team, but we also hope our waka stands out to lead positive, thought-provoking conversations around traditional kai, pūrākau and climate change solutions. “The design of our waka is simple, but it holds traditional Te Arawa patterns which we hope pushes our narrative that extra step further in encouraging connection and generational responsibility for the protection of these taonga.” Marine biologist and ecologist William (Te Arawa, Ngāti Tūwharetoa, Te Whānau-ā-apanui) has been in the TALT job three and a half years. He was born in Hamilton but grew up in Rotorua. The father of three also spent six years in the United States. He is proud that the Te Arawa Catfish Killa project to eliminate the brown bullhead catfish has been so successful. “Our volunteers are still catching loads of catfish in Te Weta Bay. With our new waka, we intend to increase our impact by setting more nets in those hard-to-reach places that many volunteers can’t get to. “We will be setting a further 40 nets around Rotoiti and Rotorua in an attempt to minimise the catfish population before breeding starts later in the year.” With eyes to the future TALTŌ are training their current staffō to move into the driver’s seat of Koura and the future waka to come. Ō “We currently have two Commer cial Skippers with two more to be signed off in June. “Diver training will continue too as the need for this type of mahi is only going to increase as we move on, and our waters open back up to the world. “There is no telling what biosecurity threats we could be facing in the years to come, but Te Arawa will be ready with a skilled team to put the stops in place when needed.” Another initiative he introduced, the Uwhi, is still being monitored but preliminary results look promising. Uwhi are closely woven flax mats which are anchored to the lakebed to suppress pest weeds. Because Uwhi block out sunlight, photosynthesis is suppressed and the introduced pest weeds die off, allowing the native species to regenerate. Uwhi have been installed at Lakes Tarawera, Rotoma and Rotoiti. Having allies in the fight against pests also means projects have more chance of success. William and TALT welcome co-governance with the Bay of Plenty Regional Council and Rotorua Lakes Council. The BOP Regional Council works towards a vision of “Thriving Together – mō te taiao, mō ngā tāngata,” and focuses on delivering a healthy environment, fresh water for life, safe an resilient communities and a vibrant region.talt’s strategic goal is “Te mā o te wai e rite ana kia kite i ngā tapuwae ā te kōura” (the quality of the water is such that you can see the footsteps of the kōura). “We want our waka to be more than just a boat, we want it to be a vessel carrying a key message and, in this instance, a talking point to our taonga species. “Corey, TALT’S lead diver, says he was not totally on board at first because he thought TALT was looking at economics not the environment. At a meeting at Ruato Corey was asked if he wanted to help and volunteer monitoring catfish. “At that time, I was kaitiaki for my [Taia] whanau at Cherry Bay, Lake Rotoiti.“fast forward and I am part of their environmental team and TALT are pioneering new ways to manage biosecurity. The catfish strategy is successful and that strengthened relationships among the parties. “Maori whakaaro forever.”