Busy summer for artists in residence

Arts Village trio focus on projects close to their hearts 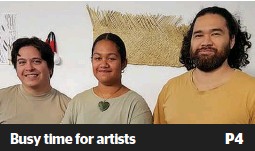 It’s proving to be a summer of growth, discovery and sharing of the arts for three artists who are working on projects important to them. The Arts Village’s resident artists for 2021-22 are Akoni Pakinga, Kahurangi Dewes-green and Sean Rivera. Akoni Pakinga is a Rotorua-based digital artist. His art has a cartoon style, influenced by his childhood watching Saturday-morning TV. His project, What If . . . , is focusing on an alternate Aotearoa — what would life be like here without European colonisation? Akoni says the project portrays how he thinks Māori people would have developed the likes of technology, and what modern Māori would look like without the influence of Western countries. He has always liked creating Māori characters, but says most art he sees depicts a more traditional Māori warrior, and he wants to show there can be more than that, and to encourage out-of-the-box thinking. He says the final product will be an exhibition of six small digital art pieces printed, including 3D printing of figures. As part of the residency, he has been holding workshops for the community that include learning about the foundations of iterative character design — how to design different versions of a character. Akoni says it is great having the space to use at The Arts Village, the people there are really cool and he enjoys talking with them. At just 17, Kahurangi Dewes-green is the youngest resident artist yet. She is still a student at Rotorua Lakes High School and says while at the artist residency, she is working on finding her own style and developing her understanding of Māori art. Kahurangi wants to go on to study Māori arts after high school. She says the residency gives her time to try out various aspects, and figure out what she wants to do and how she wants her work to flow when she gets there. “It’s about me sharing my culture and how we traditionally did our art.” She has also held some workshops, which have so far been around drawing koru patterns, the line work in ta moko, and raranga (weaving). “I’ve found a place where I can come and just do art, and don’t have to worry about buying materials.” Sean Rivera is a Filipino-pakeha New Zealander from Tokoroa, a fact intrinsically linked to his work. A recent graduate of Toi Whakaari, Sean is developing a solo comedy show, (W)asian, a piece about being that ethnically ambiguous kid in a small town and the importance of place, with a huge dose of humour and satire mixed in. “We didn’t have drama in Tokoroa. I did speeches and public speaking, and on a whim auditioned for Toi Whakaari and from there it’s just kept growing. “I’ve realised the best thing about being an actor is the community and people that comes with it.” Sean’s workshops are teaching scriptwriting, devising - making a show out of nothing, and game such as clowning. He says the residency is a really cool opportunity. “The Arts Village space is so open, full of light, and filled with lots of life all the time”.