The 7 Days a week SUV

What exactly are you driving? A 2006 Toyota Land Cruiser Prado VX V6 petrol. The Prado is a hard-core offroad/tow vehicle. Do you actually use it for that . . . or are you one of THOSE people? I’ll have you know the ramps at the Newmarket Westfield are pretty steep. And once I had to turn around on a country road where the edge was a bit muddy. Why did you buy this particular example? Kids on the way, wanted a family wagon. My wife has always been keen on the large 4WD scenario and this was the perfect fit. Would you swap it for a proper Land Cruiser — you know, the big 200-series. Too flashy? We like big, but that might be too big. Also, I’m offended by someone who doesn’t off-road in one of those. Hard core off-roaders generally accept Prado drivers might have soft hands and sparkling clean sneakers. Is this your everyday drive? I’ve turned into a bit of a walker for my health and to win arguments with planet-savers but yes, we use it every day and it’s our holiday bus. Who else drives it? I’m the “who else”. The main pilot is Megan. Occasionally she’ll throw me the keys. On longer trips I tend to sneak out and sit in the driver’s seat early but apparently I’m a terrible driver through the windy bits, so Megan takes over and we stop every 200m to let faster traffic pass. You’re an interesting person. You must have owned an interesting car at some stage. Please tell us it’s so? Haha . . . interesting? What about my white 1963 three-litre Rover? I have many fond memories of popping the hood and using a spanner to short the solenoid and get it started. Do not leave in gear when performing this procedure.it was large and slow but I felt like I was driving a Rolls. I also had a yellow Ford Laser Sport. My brother had the cool stuff, including a 1969 Holden Monaro I got to drive once. Suddenly I understood the primal attraction of the internal combustion engine. What do you always have in your car? Apart from various moulds being cultivated on the food scraps my children wipe around the interior? Face powder and a good brush. You never know when you might need to do a photo shoot. What’s your dream car? Jeeeez, just one? I’ve always been an Aston Martin fan. Though the Bond DB5 would be incredible, I’d probably gravitate to a more practical later model. And I have to have a convertible so I guess we’re looking at the DB11 Volante. What do you think of electric cars? Haha! I was about to add an electric car as my second car for the previous answer. Yup. Keen. Still evolving of course. I haven’t driven one for any length of time. I think the evolution of solid state batteries could make them even more Earth-friendly and accessible. I love the look of the BMW i3. I love small cars. I had a red Honda City for several years in the 90s. Great fun! Like a gokart. Wore it like a jacket. What do you think about driverless cars? Excited! I think the Government should stall on light rail because once driverless cars sort their stuff out, they’ll essentially become that. Summon one, leap in and it’ll attach to the conga line going down the arterial routes. I also have an idea for a horror movie where self-drive cars trap and kill the humans who use them. If Peter Jackson is reading, get in touch. 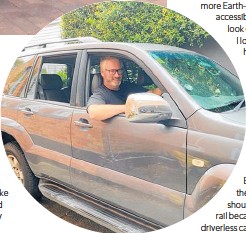