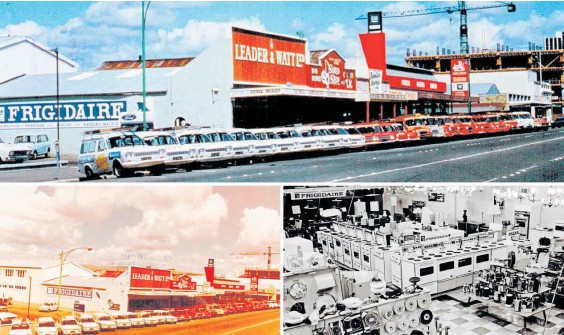 50 YEARS OF THE GUARDIAN

Leader & Watt 100% has been supporting the Manawatu¯ Guardian for 50 years. Congratulations to the paper on bringing 50 years of news to the Manawatu¯ community. Established in 1931, Leader & Watt is one of the oldest remaining Palmerston North retail business trading under the same name. Founded by electricians Horace Cecil Watt (Hoppy or Hop) and Syd Leader with the rear of Horace’s mother’s garage at 8 Carroll St as their base, they cycled around Palmerston North looking for building alterations. Enthusiasm, perseverance, and determination to succeed began to pay off and the bicycles were put aside. Motorcycles with black sidecars emblazoned with yellow lettered “Leader & Watt — Everything Electrical” were used. Leader & Watt soon gained a reputation for having competent electricians with fair charge-out rates and work became more consistent. The company purchased several 1928 Model T Ford trucks and shifted to Rangit¯ıkei St where it shared premises with an undertaker. Another two changes in premises in Rangit¯ıkei St saw Leader & Watt settle at 130 Rangit¯ıkei St, still on the eastern side, premises that would become its base for the next 40 years. The company now employed extra staff. Syd looked after the electrical contracting side and overseeing electrical installations. Hop took responsibility for the electrical servicing, repairs, buying, office and the retail shop. Early in the company’s history, Hop Watt realised that purchasing in quantity at more competitive prices meant a better deal for customers. Leader & Watt joined with other major retailers and formed a buying group, and this practice continues into the 21st century with the 100% Buying Group. In August 1978 the company moved across the road to its current site, 149-165 Rangit¯ıkei St, and the many divisions were brought under one roof. Retail shops were opened in Foxton, Feilding, Marton (1983), Dannevirke (1984) and Levin (1986) creating a multi-store organisation with visibility and buying power and to ensure the company’s stability into the future. Leader & Watt has trained and qualified servicemen continually on the road. Following the sale of a new appliance, Leader & Watt staff deliver, unpack, install, demonstrate, and take away the packing and the old appliance for recycling. Leader & Watt is appreciative of the support it receives from the community. It is 100% locals supporting locals.