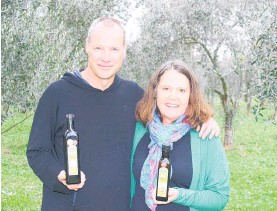 ATe Horo-based company has won gold in the world’s most prestigious olive oil competition. Totara Tunnel won a gold medal in the New York International Olive Oil Competition for its Frantoio green label, which was in the boutique medium/single varietal category. Over six weeks, a team of 21 expert tasters in 11 countries tasted more than 1200 entries from 28 countries, making it the largest olive oil competition conducted to date. A total of 543 gold medals and 258 silver medals were awarded, making a grand total of 801 medals. Other winners in New Zealand included two golds for Loopline Olives, a gold for Blue Earth, and silver for Dali Olives and Ka¯piti Olives. Totara Tunnel is a boutique grove of about 550 trees, registered as organic and committed to sustainable growing principles, owned by Brent Meldrum and Sally Murrey. Both were delighted with the gold medal. “It doesn’t get much better than that in the world for olive oil,” Sally said. “That is the benchmark for any olive oil producer in regards to quality. “If you get a gold medal in New York, it basically puts you up there with the premium producers in the world.” Brent said the gold medal was “exciting and a little bit overwhelming”. “We’re very proud of our achievement and we’ve worked pretty hard to get to where we are. “We’ve won a few gold medals in New Zealand and a couple of other pretty high medals, so to have it backed up on the international stage was quite remarkable, and gives a lot of faith that we’re moving in the right direction.” Totara Tunnel dates back to when Brent bought a 4ha block of land in O¯ taki Gorge Rd with his ex-wife in 2007. The land was off the road’s iconic to¯tara tunnel of trees, which Brent had driven past many times for tramping trips into the Tararua Ranges. When he saw a for-sale sign on the property, he jumped at the chance to buy it. “It was bought very quickly because I knew that it would be snapped up.” Brent had returned from overseas and was looking for an area to grow olives. “I had spent eight years in Europe and had friends with a property in Tuscany who had an olive grove and chianti grapes. “I spent time helping in the olive grove and just fell in love with the whole idea of producing olive oil which I hoped I would be able to follow through with when I got back to New Zealand.” By the end of the year, and into the next, 844 olive trees were planted on the property, in the front paddock and the back paddock. The olive grove thrived in the ideal free-draining soil conditions, good climate, and because the gentle breeze from the O¯ taki River kept frosts at bay. Last year, 2000 litres of olive oil were produced, with product sold in select shops and online. There is a lot of pruning underway that will increase production significantly in about three years. And they would like to create a tasting room on the property and sell to customers in person. The couple are passionate about creating world-class olive oil despite the challenges, which include working fulltime in other employment. Moreover, they’re aware they’re the kaitiaki (guardian) of the land. “We see this as a gift that we’ve been given and we want to cherish this space and make it as wonderful as possible,” Sally said. “We’re also regenerating parts of the land back to native planting before it was stripped back to farming.” Brent agrees. “We know that if we look after the land, it will look after us. We don’t spray anything onto the trees, which is very important to us, so we find other means to ensure the trees are looked after.” Olives New Zealand chief executive Gayle Sheridan encouraged people to seek out our locally made, world-beating oils, buying directly from growers online, at specialty retail stores, or at farmers’ markets where they can meet the grower and taste their superb oils. “New Zealand has a maritime climate and a different environment from traditional olive-growing countries. “Like the New Zealand wine industry, we produce distinctive and complex tasting oils that are suited to a variety of uses. “Our olive oil is fresh, and fresh tastes best. “We would encourage Kiwis, if they don’t buy New Zealand olive oil already, to try something new, and support our world-class local growers.” She added: “People should look for the red OliveMark to ensure they are buying the authentic New Zealand extra virgin olive oil product. “Imported products are not required to meet the same stringent standards, and some New Zealand brands are imported oil that is packaged in New Zealand.”