Regent Cinema in Pahiatua takes on a new journey, under the direction of Derrick and Alaina Sims 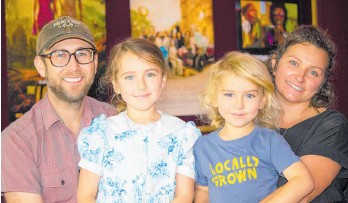 Derrick and Alaina Sims are sharing the role of running the Regent Cinema in Pahiatua, having taken over from Bruce Lea at the beginning of April. Derrick is a filmmaker and Alaina works alongside, writing, producing and designing productions. They own their own production company, Fabled Motion Pictures and have been producing movies for over 15 years, from writing scripts to assembling the teams, shooting the pictures, editing, distributing and exhibiting the films. The couple grew up in tiny neighbouring towns, Kingsland and New Edinburgh, in the US state of Arkansas, meeting for the first time in kindergarten. “My parents once borrowed a camera from a family member, I took it out one weekend, when I was about 8 years old. I made my first movie. By the time I was 10, I was ‘that kid who makes movies’, Derrick says. “Friends would come over on the weekend and we would go out to the woods and make Rambo pictures and karate films — anything that would give us the opportunity to fight or blow things up on screen. I would write scripts, do costumes and we had a lot of explosives — they were easy to get,” he said. The couple began dating as they graduated high school. Derrick had a scholarship to study architectural design, but Alaina suggested he do filmmaking. Derrick went on to study mass media with an emphasis in broadcast journalism and newspaper writing. With the cameras available in the broadcast department, he continued making short films. “When I was 19 years old, Alaina and I got married. That’s also the year I got my first big break — a short American Civil War film. The right people saw it, and one night I got a phone call from Imax. “The proprietor had seen one of the couple hundred DVD copies I made of that film. We sold them at the only store in town. They asked if they could show it before their screenings of Ang Lee’s Ride With the Devil, another Civil War film. “That was 2005 and in 2006, I got my first full-length feature. Then in 2008, I began working in Los Angeles. We moved there fulltime a couple of years later.” Derrick’s career has been mostly as a director of photography and editor. He has directed a couple of features, one of which, Come Morning, is opening the Wairarapa Film Festival on May 27, where he will do a talk after the screening. “In 2016, things were a bit shaky in the US, so we wanted a change of pace and lifestyle, so we sold everything, had no plan, but set our eyes on New Zealand. In April of that year, we wrapped production on our latest feature, The Perfect Host: A Southern Gothic Tale, and I saw a job for an artist in residence at Massey University. They were looking for a filmmaker. “Having just completed (Host), I could edit the film in the three-month residency and present it to the university. I got the position. “We moved on July 30 and I started on August 1. That led to me getting a job at Ucol teaching filmmaking on the Bachelor of Creative Media Degree. I still do that. “I’m also doing two films at the moment. One is being produced by an old friend now in London and I do the editing in Pahiatua. He is thinking of shooting his next feature in New Zealand, though. The other is a short film, shot in Palmerston North — it has half the budget of my first feature film, and it’s a short. “From April, Alaina and I have been running all the shows at the cinema in Pahiatua, through the school holidays, so we could get to meet all the people. “We wanted to know what show times work and what sort of movies appeal to a broad audience, to get people back in the cinema and making movie-going really fun and cool again. “There hasn’t been a massive learning curve coming into screening movies as opposed to producing them. I’d been a film projectionist as a hobby in my house and a collector of various formats of film projectors. Today, projection is so automated — so much simpler than it once was. “We are planning to offer alternative films as well as continue to cater for our existing patrons. We have a documentary series coming in early May and I’m trying a midnight-type screening series — but at 9pm. Pahiatua doesn’t seem the place where you get big crowds at midnight. But I think there’s a group of people keen on those types of films. “I want us to create a community of people who just absolutely love the movies and trust that whatever is showing, is going to be a good show. Bong Joon Ho, the South Korean director of Parasite, said during his Golden Globe acceptance speech: ‘Once you overcome the one-inch-tall barrier of subtitles, you will be introduced to so many more amazing films.’ And he’s right. “We’re not going to rush to program heaps of foreign titles, but we want our audiences to try new things and to embrace the art of cinema as well as the Regent. Tararua Cinematheque has really helped build on that idea. That’s been pretty successful.” Lots of updates are planned for The Regent Pahiatua. Mike Swift, aka Swift Mantis, will be creating his first cinema mural on the Tui St wall throughout the month of May. There will be all-Kiwi films within the mural. The cinema is getting a new ticketing system this month so patrons can book their seats online beforehand, buy vouchers and gift cards.