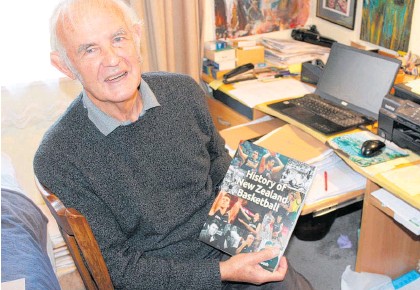 For six years Roger Booth has given most of his time to creating an authoritative history of basketball in New Zealand. History of New Zealand Basketball is hitting book shop shelves after a series of nationwide launches/ reunions throughout June and July. “This is the only full New Zealand history of our sport and there will not be another one for many years,” said Booth who is now in his 70s. Booth, from Raumati Beach, has painstakingly sifted through masses of files as well as talked to a couple of hundred individuals throughout the country. The task was magnified because a lot of material was missing from Basketball New Zealand files. But over time, in the sanctum of a spare bedroom in his house as well as a sleepout, both converted into a dual study hub, the book came together. It features various insights, key moments, comments from players and officials, lots of photographs, and every senior international game from 1947 to 2020/21. The book also features “the only and complete file of New Zealand players, coaches and managers”. It has been a labour of love, to say the least, but has been something he has enjoyed doing especially since he is passionate about the game. Booth’s love of the game started when he was in the third form at Wellington College in 1958. “The year before, an American [John Wooden] had come to New Zealand and told us that the jump shot had been introduced into basketball in America and it was going to take over the game. “So I learned the jump shot which was the first year of the modern game in New Zealand. I was just lucky enough to be part of that generation.” Booth went on to play for Wellington, was chairman of Wellington Basketball [as a university student] and was a New Zealand junior coach. By the time Booth left Wellington, in about 1970, to take on a teaching role up north, he had accumulated a lot of documents that would serve him well when it came to the 570-page book project. Booth knew the importance of the project historically considering various key people, especially in his 60-70s era, were getting on in years or had died. “I felt that if no one got into the research of basketball in New Zealand pretty quickly they wouldn’t be around to talk to. “A number of those people have died as I’ve been doing the project, including Steve McKean who was a very significant coach and one of my big supporters.” Booth said compiling the book wasn’t easy especially as there wasn’t a solid record of history. “And through three, what we will call accidents, over the years, they [what is now Basketball New Zealand] threw away most of the historical material such as coach and manager reports of teams and stuff like that.” Booth started to fill in the gaps, as much as possible, via conversations including people like John Macdonald who was a significant New Zealand player and captain. “John is now the patron of Basketball New Zealand and has just retired as a judge. His mother kept a scrapbook which was helpful too.” Chatting to former national captain Glen Denham was a highlight. “He was the most incredible person I’ve ever interviewed. “I could ask him about any player he had been associated with and he could tell me everything about them from exactly what they did on the court, what they were like as an individual, to their background. “Dillon Boucher, who is now chief executive of Basketball New Zealand, was another person like that.” Booth hoped people would be satisfied with the book. “I feel there was nothing else I could do in terms of the task I had set myself to do. People say that books are going out but I don’t believe that. “You could have all of this online but nothing beats picking up a book and going straight to a page. “I believe there’s always going to be a book. And the second thing, I believe, there was only just an opportunity to get ‘the’ book on basketball. “There have been similar things like rugby and cricket almanacs, and athletics and other sports, but basketball needed that as well. “This puts basketball in with those other sports.” To order a copy of the book, which is $60, email Roger via chrisrog@outlook.com.