When Shannon King met the founder of Pregnancy Choice, she knew she wanted to establish a centre in Palmerston North. It took her two years, but Pregnancy Choice and its op shop, Re: store, opened in July, filling the longvacant former home of Abode Interiors at 36 Broadway Ave. King found herself unexpectedly pregnant when she was young, so when she met Janice Tetley-Jones in Auckland and learnt about the work of Pregnancy Choice she was eager to bring the service to Manawatu¯ women. As a pregnant single teen, King received support from her mother and they talked through the options. King decided to keep her son and she now has two grandsons. She believes in people being well informed before making a choice, and is motivated by the desire for people to have the information she was given. Pregnancy Choice provides free and confidential information and support to women facing an unexpected pregnancy, including pregnancy tests. It offers a Living in Colour post-abortion healing programme. Having the centre at the back of the shop provides a safe, more discreet entrance for people seeking support, King says. She has a background in youth work and more recently has been putting time into her three younger children. Everyone at Pregnancy Choice Palmerston North and Re:store, including King, are volunteers. Re:store sells clothing, linen, toys, shoes, books and kitchenware. There is also a koha coffee lounge and children’s play area. King says customers love the way the shop is set out. She spent a long time looking for suitable premises. “It’s lovely to be central, it’s lovely to be part of that bring back Broadway campaign, bringing some more life to Broadway. It’s been so quiet for so long.” With Orphans Aid a little further up Broadway and Be You around the corner in The Square, there is now a destination strip for op shoppers. In 2013, Tetley-Jones opened the first Pregnancy Choice in Tauranga. She said then that pregnancy could be a scary time, even for women who had support. “For those women who don’t have the support it can be a really difficult time for them. We are here to offer support and help them through a tremendously difficult situation.” She believed there was insufficient information about adoption and fostering, which she hoped to change. “For a lot of women, the first reaction is panic, then ‘What am I going to do about this?’ We say let’s just sit down and talk about this.” She said many women felt pressured to make a certain choice. “We aren’t going to set ourselves up as being for or against certain options and want to keep out of the pro-life/ pro-choice debate and avoid the labels. Our goal is just to help the women who need it.” Re:store is open Tuesday to Friday 9.30am-4.30pm, Saturday 10am-3pm. Pregnancy Choice can be contacted on 022 3456 180 or kukunetangakowhiripn@ gmail.com. 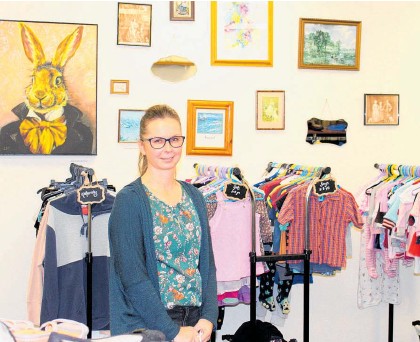