Foxton Little Theatre’s midyear production Lent tells the story of Paul Blake, a 13-yearold orphan, as he prepares to leave the prep school that has been his home. It is an account of the uncertainties and growing pains associated with young adulthood, depicting a young boy centre stage in an adult play. Mentoring Paul on his journey to adolescence is his avuncular ageing Latin teacher, Matey. There’s also Paul’s guardian and grandmother, Mrs Blake, the devious and scheming headmaster, Edwards, and his demented, domineering wife. By British playwright Michael Wilcox, Lent is a semiautobiographical account of boyhood and developing sexuality. It was first performed in 1983 and is a play of love, greed, companionship and hope. Playing Paul is Navah Chapman in his first major leading role. Carolyn Allan is Mrs Blake, Bernard and Lynne Long the Edwards couple, and the director, Carl Terry, plays Matey. 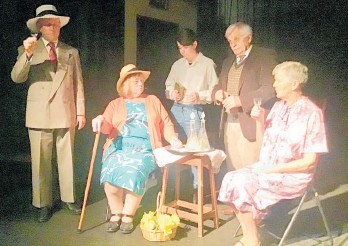