“You have to be brave for all the right reasons and not because it’s popular or easy” — the wise words of Tayelva Petley, one of 10 courageous women whose incredible stories have been shared in a book titled Inspiring Kiwi Women. Sadly, Tayelva lost her battle with cancer and died in January before the book, written by Dr Wendy Gillespie, was completed. Wendy lives on a block of land at Whakamarama. She loves to paint and is teaching herself piano. She has a passion for life and positivity and wrote the book sharing “no holds barred” conversations with women covering a range of topics from mental health, bullying, violence, drugs, career, spiritual growth, relationships, entrepreneurship and more. It tells their stories with raw honesty, how having experienced enormous challenges, they have not allowed themselves to be diminished by them. One 80-year-old has had cancer four times and is a ball of positive energy, another started an apprenticeship at 60 years of age, another left for dead after a violent beating has trained herself to walk again and now helps men and women perpetrators of violence to learn new communication strategies. Another, raised in the gang environment, now motivates women, men and wha¯nau to want better lives. And a woman who grew up as an Indian/Kiwi tells of the cultural pressures she faced. Each women’s story is unique. Wendy was inspired after picking up a book at a Lions market called Inspiring Women, written by an American woman who interviewed 30 mostly wealthy businesswomen and who had been inspired by mainly famous people like Florence Nightingale and Mother Teresa. “Often when you’re going through a tough time someone you meet resonates with you and picks you up. When I read stories in this book about their lives, most hadn’t had much of a tough life. I couldn’t see why they had been chosen.” “I thought, man I know some amazing kiwi women from different walks of like. I reckon we could write a better book and a better set of stories.” Overnight Wendy had written the purpose (kaupapa) — to inspire others and to read a life story that would touch them. She needed to write it so it was easy to read and understand. She had identified a couple of people she knew would be suitable and to gather volunteers she posted a note on online network LinkedIn. “Others came forward and I could probably have had another 10 in the book easily. “Some of the stories are hardhitting, but it is not that traumatic where people think, ‘oh my God, this is terrible’; the person reading the story would say wow what an amazing woman and how she got through, with things like values, identity, resilience, positivity.” She tripped around the country interviewing the women and had structured key questions. She let them start their story where they wanted to start. She kept each story short, 12-14 pages. The last chapter is Wendy’s own inspiring story after being “nagged” to put it in. She grew up thinking sexual abuse and violence was the “norm” in families. Her story is about how different choices had to be made to make a better life for herself and her children. Wendy studied for 19 years while raising two children on her own and holding down two jobs at nights and weekends. She has several degrees and a PhD. She has a consulting company, Purpose with Passion and coaches others in leadership, management and personal development. The book was written in 10 months with 200 copies printed — 120 have sold. When the book was in its final stages Wendy put it on a Givealittle page to help raise funds to get the 10 women together, since they hadn’t met each other. She said, “a woman rang me and said she heard I needed the money and how much she would donate. I was speechless!” This helped publish the first lot of books and covered costs to take the women to the Millenium Hotel in Taupo in May to launch the book. “Each of the women were given a gift basket. They were tickled pink.” Any profits from book will go into a fund to support a retreat for men, women and teenagers healing from violence and abuse. The book is available on Amazon. com and can be read in Kindle eBooks. 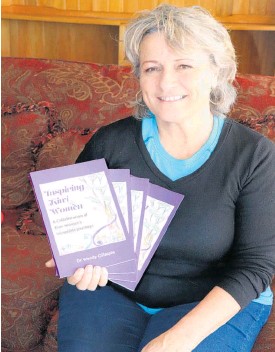