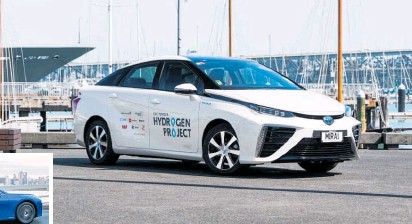 Toyota New Zealand has commenced what it says is “the first commercial application of hydrogen fuel cell vehicles in NZ”: a car-sharing programme with eight prominent Kiwi companies. A fleet of four Toyota Mirai models are being shared between The Warehouse, Air NZ, Saatchi & Saatchi, TVNZ, Beca, Westpac, Spark and Z Energy. The vehicles are a mixture of first and second-generation models and are accessed via Toyota’s City Hop car-share service. Toyota is not the first Kiwi car distributor to put hydrogen vehicles on the road: Hyundai NZ has had a small fleet of Nexo SUVs registered for demonstration purposes since 2019. Both the Nexo and Mirai are wellestablished in markets where hydrogen is available for passenger-vehicle use, including South Korea, Japan, Europe and the United States. Toyota NZ’s Mirais can be booked and used in the same way that the public uses the existing City Hop fleet, although the eight member companies have special Hydrogen Project access credentials. “While the hydrogen fuel cell electric vehicle (FCEV) is tried and tested technology, we applaud the members’ willingness to sign up to this unique scheme and give hydrogen a go,” says Toyota NZ chief executive Neeraj Lala. “Car-sharing with hydrogen cars is not common anywhere in the world and we are all keen to see how this will work in practice, and how we can utilise this technology further.” While a FCEV is a type of electric vehicle, you don’t plug it in. It’s fuelled with hydrogen, which a fuel cell combines with oxygen in a chemical reaction. Electricity, a by-product of this reaction, is used to power an electric motor. The only discharge from the exhaust pipe is water. The Hydrogen Project Mirais are being fuelled by Green Hydrogen; FCEVs do require special filling hardware, but they can be topped up in about the same time as a petrol car and offer similar range (500-600km for the Toyota, depending on model). A meaningful hydrogen refuelling infrastructure is not yet established in NZ, although the Government has granted $20 million for Hiringa Energy and partners to build eight stations from Auckland to Christchurch starting this year (aimed mainly at heavy transport). There are also private hydrogen filling points suitable for passenger cars. Toyota NZ has not shared details of its Mirai refuelling plans, saying instead that it has “a few different partners to refuel the vehicles as needed”.