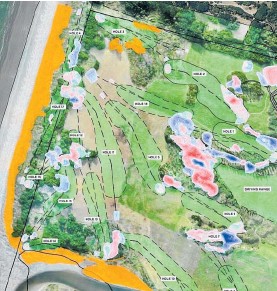 Plans for a world-class golf course in O¯ hau have been paused as areas of coastal land near O¯ hau were identified by local iwi as wa¯hi tapu. Both Ngati Tukorehe and Muao¯poko iwi opposed a consent application lodged by Grenadier Ltd at a two-day Horizons Regional Council resource consent hearing in Levin this week. Representatives of Tukorehe described the significance of a historic pa¯ site called Tirotirowhetu, and a lack of adequate consultation, as key reasons for opposing the application. At the hearing, Ngati Tukorehe kaitiaki Pat Seymour said it was difficult to voice the knowledge as some things pertaining to wa¯hi tapu were sacrosanct within hapu¯, but he felt obliged to. “It is in no way meant to frighten or scaremonger or hurt people, it is meant to actually help those wanting to do this understand. We would be failing as kaitiaki not to, and to have something go amiss,” he said. Seymour said the area of Tirotirowhetu, identified as being near the O¯ hau River mouth, was wa¯hi tapu. He knew of people who had taken taonga from the area and fallen ill. A Pa¯keha¯ wha¯nau who moved to the area in the 1870s had two children drown through not understanding tikanga, and breaking tapu. “The area is so sacred and tapu, it cannot be disturbed . . . I don’t beg or plead or anything. I say it like it is,” Seymour said. Tukorehe representative Lindsay Poutama said they were aggrieved by late engagement in the consultation process that meant they were unable to exercise manaakitanga. “Nothing about us, without us,” he said. Muau¯poko kaitiakitanga kaiwhakahaere and taiao Dean Wilson said it had opposed the application, but was working with Grenadier on a Memorandum of Understanding. Muau¯poko too recognised Tirotirowhetu as wa¯hi tapu, and the iwi had a tradition of using dune land along the coast for burial. Grenadier Ltd engaged former New Zealand professional golfer Phillip Tataurangi to lead an iwi liaison team. Initial iwi engagement saw Ngati Kikopiri identified as having manawhenua and the liaison team were observing tikanga by first engaging with that iwi, leading into consultation with both Ngati Tukorehe and Muau¯poko iwi. There had been consultation with Tukorehe as early as August 2020, initiated by the applicant. Constraints due to Covid-19 had restricted some of the engagement process, which meant the concerns of Tukorehe weren’t expressed until the hearing this week. Kikopiri Marae committee members Dennis Paku and Robert Kuiti said the process offered an opportunity for all affected iwi and hapu¯ to work together. The applicant wasn’t helped by the fact that the initial non-notified resource consent application lodged with Horowhenua District Council in 2020 identified that the proposed course design had “no more than minor effects on cultural values”. The site was not registered in HDC’s District Plan as being a site of significance. The proposal did have wider community support, with 17 of the 19 submissions tabled in favour of the development. Meanwhile, at the end of the hearing legal counsel John Maassen, representing Grendier Ltd, requested an adjournment of proceedings to allow the applicant an opportunity to respond to fresh concerns raised at the hearing. Maassen said a shift in leadership and a change of view from what was intimated during the initial consultation was concerning, although the applicant was committed to fostering relationships with iwi. In his original submission Grenadier principal Hamish Edwards had said educating people about the history of the land would be part of the experience offered to guests and iwi would be involved in discussions on how best to represent that. A caddy programme was mooted to help educate visitors about the history of the whenua. Hearing commissioner Christine Foster pencilled in an adjournment until June 3.