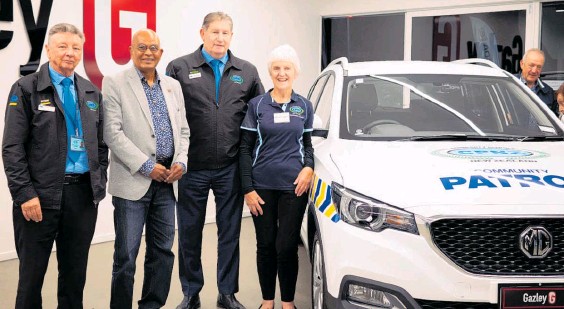 Beach night watch patrol in 1992, it was followed two years later by a Waikanae Town night watch patrol. The two later merged into a single organisation and later still, became affiliated with Community Patrols New Zealand, the national coordinating 2000. There are three community patrols in Ka¯piti — O¯taki, Waikanae and Ka¯piti (Paraparaumu south to Paeka¯ka¯riki) with the Waikanae patrol currently having 24 active body was formed in patrollers. All are volunteers who cover shifts on Friday and Saturday nights and Thursday afternoons. Hunter said the car has been funded by donations from many sources. “It has been funded largely by accumulated donations from the Waikanae community reflecting the wide support that it enjoys. “Its principal supporters have been the W N Pharazyn Trust, Goodman Contractors, Harcourts Real Estate and Woodman Automotive. “The old car was funded by a grant from the ANZ staff fund.” The formal launch of the new MG ZS patrol car was held at Gazley Motors in Paraparaumu. Waikanae Community Patrol chairwoman Glenys Huggett said: “Gazley have kindly offered to sponsor the function to aid both the 30 anniversary and new car celebrations”.