Four influential young Kiwis have been chosen to represent New Zealand at the Apec Voices of the Future in November, including Ka¯piti’s Sophie Handford. The annual youth event brings together 18-to-24-year-olds from across the Apec region to discuss the big issues facing the world and have their voices heard. This year’s Voices summit is being held virtually during Apec Leaders’ Week and will focus on four key themes: international co-operation to combat Covid-19, the digital future, a greener future, and a future for all. At the end of the event, they will present their Declaration to Apec 2021 chairwoman, New Zealand Prime Minister Jacinda Ardern, on behalf of the nearly 1 billion young people across the Apec region. Taking place on November 9 and 10, Sophie will be joined by Lit Wei Chin, 24, from Birkenhead on Auckland’s North Shore, Jess Jenkins, 18, from Titahi Bay in Porirua and Shisla Macleod, 22, from Mt Albert in Auckland, now living in Wellington, who will work with young representatives from around the Apec region. The delegates will be split into groups to look at one of the four key themes with the New Zealand delegates looking at a “future for all”. “We will be focusing on a future for all which enables us to use our diverse strengths to feed into that,” Sophie said. “We will have online drafting sessions from October 13-22 before compiling a youth declaration which we will then present to this year’s chair, Jacinda Ardern. “It’s not a very extensive document but it’s a few pages which give a sense of what youth from across all boundaries are thinking in 2021.” At first unsure about applying to be a New Zealand youth delegate, Sophie said she didn’t want to apply to “just another token youth event tacked on to a wider event”. The Voices summit is an opportunity to present not just their thoughts but solutions for right now. “I think what young people have to say, especially now, is important — we want to make an impact not just talk. Young people aren’t just the future, they are bringing forth the solutions that the world needs here and now. “We talk a lot about the future — our theme is ‘a future for all’, but what I’ve been thinking about is how long we are going to be talking about the future before we’re actually doing it right now. “It’s frustrating always looking to the future, but this summit provides an opportunity to reframe that thinking — it provides an opportunity to show that the future we were talking about 20 years ago is the time that we’re living in right now.” Determined to see the challenges as opportunities, Sophie said, “As a team, we want to go in with an open mind and an open heart. “I’m very keen to focus on representing New Zealand well, putting New Zealand on the map in terms of what we have achieved around Covid-19, the climate, as well as indigenous equity. “I’m looking forward to gaining an understanding of where the world is at while making sure New Zealand is positioned well in that conversation. “There are some good things happening in the world — we’re on an alright path, we’ve just got to go faster and keep moving.” The Voices summit is organised by Apec Voices New Zealand and Auckland University of Technology, with support from Apec New Zealand and Apec Voices Secretariat. APEC Voices NZ chairman David Ward said, “The Voices of the Future conference has been an established part of Apec since 1998 and since then more than 100 young New Zealanders have taken part in the event. “We look forward to hearing what the Declaration of this year’s cohort will be.” 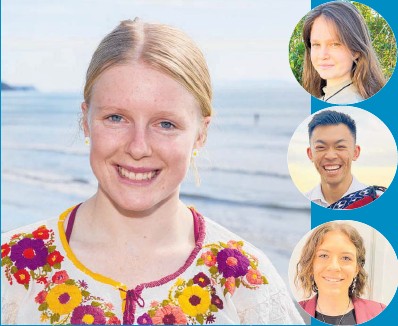