DEEP IN THE HEART of the Ruapehu District, at the confluence of the Retaruke and Whanganui Rivers, lies a wilderness experience to blow your socks off. It’s a kingdom of long soulful valleys, striking geological formations, beautiful gorges, stirring rainforest and stupendous balcony views high on the hilltops, reaching right across the central North Island. Owned and operated since its establishment in 2005 by Dan Steele, Blue Duck Station is dedicated to farming smarter, honouring the history and environmental regeneration on a grand scale. He’s like a sustainable Fred Dagg, a happy conservation warrior, a good keen man with a deep-seated environmental conscience. Never one to rest his on laurels, his grand vision for environmental restoration sees him frequently expressing frustration at the lack of hours in a day. He’s been rescue helicoptered off the station on three occasions, after breaking his shoulder, his back and busting ribs. Dovetailing with his parents’ farm, Retaruke Station, and wrapped in the rainforest splendour of Whanganui National Park, Steele’s kingdom spans nearly 3000 hectares. One of the first things I noticed on arrival at this sprawling high country station are the wetland projects that Steele has embarked upon, determined to improve the water quality of the rivers. They act like giant water purifiers that catch the water flowing off the hills, before it spills into the rivers. Sheep and beef farming continues, but conservation is at the heart of Blue Duck Station, including bolstering the local population of its namesake, the endangered whio or blue duck, which adorns our $10 note. The station also supports a healthy brown kiwi population, while nurturing the prospects of our native bat, weta, numerous insects, fish and birdlife. I gazed in awe at the big flocks of tui and kereru. Steele took me on a comprehensive ATV safari tour all over the station, crossing burbling rivers, mounting formidably steep hillsides and basking in the ravishing blanket of the rainforest. At every turn, conservation endeavours are a constant, it dictates every decision made, with much of the farmland retired from service and reverting to native bush, while waterways have been fenced off. Blue Duck Cafe´ , which crackles into life at night, with the family-style dinner served around a fabulous communal dining table, as a fire roars and conversation flows. Mountain-biking, kayaking and guided horse-trekking are all hugely popular here and the station has also launched multiday horse treks, rediscovering the remote wilderness landscape of forest, mountain tops and river valleys. The sense of history is ever-present. There’s a cluster of preserved historical dwellings on the station — remnants of the era when World War I returned servicemen tried in vain to farm the nearby Mangapurua Valley. Such a treasure is the old Depot building (circa 1919), which was once the supplies store for those returned servicemen who broke in the rugged country at the ill-fated Kaiwhakauka settlement. Steele, his wife Sandy and their four children live in one of the pioneering farmer houses, the original station homestead, which was originally the home of the Dobbs family and their 18 children! Blue Duck Station offers great-value accommodation in five rustic lodges. I stayed in the Frontier Lodge, paying homage to the first Pa¯keha¯ settlers in the valley. But if you want to have a seriously good splurge, the latest next-level offering elegantly graces the farm’s loftiest mountain ridge. Chef’s Table at Blue Duck Station serves up one of the most remote accommodation and fine-dining experiences in the world. Accessible only by chopper or 4WD, the venture is a collaboration with youthful British star chef Jack Cashmore who visited, fell in love with and now makes his home on the farm. With three luxury double en-suite cabins crowning the ridgeline, a short boardwalk leads you to the restaurant, where a 10-course degustation menu awaits. The whole experience begins all terrain vehicle safari through the vast station’s extraordinary rainforest. Foraged and sustainably farmed produce from the land surrounding you, powers the refined tasting menu, from wood ear mushrooms and native herbs to farm meats. Standing atop this towering terrain, it’s the horizon-wide views across the rows of ridgelines that took my breath away. Blue Duck Station is such a charismatically uplifting sort of place, it will steal your heart. It’s an off-the beaten-track heartland destination beyond comparison and an essential New Zealand experience. 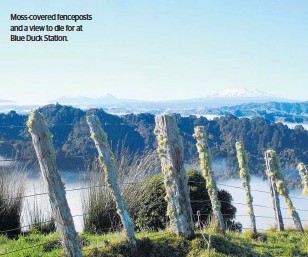