Aveteran rock band frontman and music academic has been recognised in the Queen’s Birthday Honours List. Dr Graeme Downes, from Otaki, ¯ has been made a Member of the New Zealand Order of Merit for services to music and music education. Downes has been the key member behind The Verlaines for 40 years and worked at the University of Otago lecturing on music for 20 years. “I’m stoked,” he said on the accolade. But it was also a reflection of the people who had put their “heart and soul” into the band over the years. “It’s a big family of people. I hope that people who have helped keep the odyssey going over all these years can bask in it. “I know that I’m getting it [the honour] as I’m the common link that wrote the stuff but I couldn’t have done it without other people.” Growing up in Dunedin, Downes developed a wide-ranging love of music from rock to classical. “I was a radio addict so was growing up with Motown and The Beatles as a small child and that broadened to classical music when I hit high school.” He founded The Verlaines, which would release about a dozen albums over the years and tour extensively in Australasia as well as three tours of the United States. “We sort of existed in name in 1979 but it wasn’t really until 1981 that we properly started.” Downes, who was writing most of the songs, soon became the group’s lead singer. The Verlaines — named after French poet Paul Verlaine — became an integral part of the “Dunedin sound” which included The Chills, The Clean and Straightjacket Fits. Downes loved writing songs, often basing them on poems he wrote, and likening it to adventure tourism. And “not giving a damn how it turns out, because there’s nothing riding on it, which is kind of cool”. Downes said he had kept The Verlaines name going so if it got successful, at any point, it would force people to listen to its earlier work, which is happening now. He was excited about a re-release of some of the band’s music via the Schoolkids Records label in the United States. “We have a live double album from 1986 or 1987 coming out, on Schoolkids, for World Record School Day which is on June 12. “We digitised the mixes, before the tapes fell apart about a decade ago, and it’s an absolute miracle that it exists, but it does. “The world is going to be able to time travel back to the mid-80s, to a pub in Auckland, and listen to us play. “The vibe is absolutely insane. “It’s a really exciting record to listen to. It’s like opening it back up to a new group of young people again.” The album would be a limited edition. “I think the initial run is 1000 copies worldwide. Some will make it into New Zealand and they will be expensive because vinyl is.” Moreover, Downes said, “We’ve got a whole list of re-releases coming down the pipe.” Aside from band life, Downes has been an academic at the university before retiring last year. He lectured at the university’s department of music, developing New Zealand’s first rock music degree before becoming head of the music department. And with a PhD on the music of Mahler, he has provided pre-concert lectures for the New Zealand Symphony Orchestra and Southern Sinfonia/DSO and has contributed to music programmes on Radio New Zealand. Downes has also served as a songwriter ambassador for the Australasian Performing Right Association and the Australasian Mechanical Copyright Owners Society supporting music creators. After university life, Downes, who is “60 sometime soon”, moved to O¯ taki. “It’s a nice community and people are friendly.” He’s busy working on a new album, chipping away in the garden, entertaining a new puppy, soaking up a milder climate, and of course enjoying the royal honour. 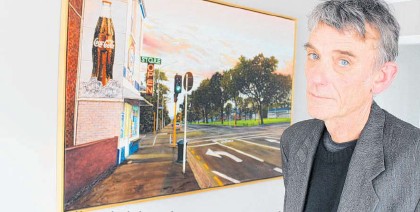