Foxton were leading 13-9 at halftime 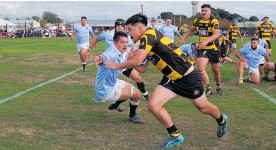 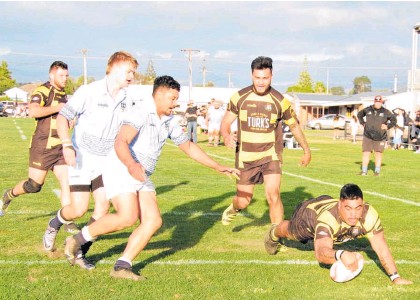 Under sunny conditions at Easton Park in Foxton, College Old Boys (COB) ran out the winners over Foxton on Saturday. The game started at a quick tempo, with each side matching each other in controlling the real estate. COB opened the scoring with a penalty. The locals fought back with Foxton scoring an unconverted try to be leading 5-3 after about 10 minutes. The game sort of slowed in tempo with each side matching each other in breakouts from their own halves. Foxton then managed a penalty followed by a break out of their half with left winger Tema Tihema scoring a fine try in the corner of the field. COB managed to reply with a penalty of their own taking the score to 13-6. The run of play stagnated with stop start action before COB bagged a further penalty with Foxton leading 13-9 at halftime. Foxton player coach Kenny Hill said, “Our accuracy when we’re executing moves needs to be more proficient. Our penalty count against us, we have to work more on it especially around the ruck areas. “We’re being caught out, and holding on to possession when we’re down in their half, all that’s needed is to hold the line,” Hill said. COB coach Axel Neilson said, “We’re carrying too high, and we need to get a bit lower in this aspect. We haven’t crossed the line yet, just the penalties, in relation to the score board. “We’ll cash in on those points now and keep building so we can get that later on,” Neilson said. After the break COB took control of the game scoring two quick tries making the score 21-13. Foxton could only hold the line at times and made life a bit difficult for themselves when their captain Pieta Marshall was sin binned for careless action at ruck time. COB continued putting the pressure on Foxton with two more tries late in the game making the score 33-13. With time almost up, a backline move down the left wing saw Foxton winger Cannan Hapeta-Tekura score a try in the corner. With the conversion missing, COB won 33-18.