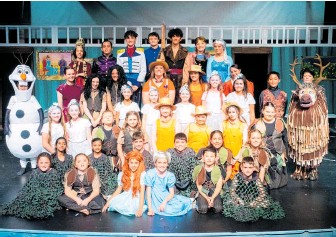 Levin Performing Art Society’s latest youth production had all you’re accustomed to from their shows. Frozen Junior was directed by Jenna Wicks, with Sjan Giles-Oza stepping up to musically direct her first show and the choreography was coordinated by the more than capable hands of Caitlin Sanson. From the opening scene as the Ice Pickers entered the stage accompanied by the marching beat of their ice staffs to the final scene as the citizens of Arrendale celebrated the end of the eternal winter and return of summer, the show enthralled the audiences. The set was creatively brought to life by the artwork of Libby Bruhn and complimented by the visual effects of the lighting team, with the magical change of Elsa, in a blast of coloured smoke, to the Snow Queen bringing gasps of appreciation from the full houses attending each performance. The younger audience members calling out to their favourite characters as they appeared on stage was proof of how well this show resonated with children. The opportunity to have photos taken with Anna and Elsa had children (and parents) lining the side of the auditorium to await their turn. Credit must go to the society and the actors involved in those roles for taking the extra time to do this after each show. There were so many standout performances and each person on the stage certainly deserved the tumultuous applause they received each night. The transitions from young Anna and Elsa (Niyah Henare-Pearson and Saiorse Williamson) to middle Anna and Elsa (Lavara Makutu and Imogen Williamson) and the final Anna and Elsa (Amber Rollinson and Tiana Fryer) were seamless and effective with all six performing their roles convincingly. Miles Harrington as Prince Hans, the villain, carried his role strongly and, as should happen to all villains, was seen off in style, while Baron Wessleton played both sides with humour. Kristoff (Anthony Tautari), Sven the Reindeer (Rhiley Good), and Olaf (Leo MartinArnault) were all wonderful in their roles with the Sven and Olaf costumes a credit to the wardrobe team. Elsa’s Snow Chorus appearing in their silver and white costumes added to the overall visual effect and helped make the production what it was – another outstanding performance by talented Horowhenua youth and the Levin Performing Arts Society.