“Stoked, stoked!” That was the reaction from Brian Forth, LevinWaitarere Surf Life Saving Club long time member, and past chairman, to the news the Horowhenua District Council had agreed to move funding for the club’s new building to the first year of the Long Term Plan (2021/2022). “This has been a long time coming,” Forth said, “we’ve been working on [getting funding] since 2008 [and the club has] spent a lot of money maintaining the current building.” A recent report on the clubrooms, requested by the council, identified two major issues: the building is firmly in the earthquake prone category; the main support beam on the observation tower has rotted through. The original consent for a new building was approved over five years ago, after a public hearing with an environment commissioner. The consent gave approval for a surf club building to be constructed and set out further conditions. After a lengthy wait, LINZ approved the council’s land title claim in early 2020, paving the way for detailed planning to begin. A proposal was made that the new surf club building be two levels and located about 50m south and more seaward of the current building, which is situated at least 80m from absolutely the high tide mark due to beach growth. The original surf clubroom was built in 1953 and situated close to the toe of the foredune. Forth remembers the observation tower had to be added to the top of the building around 1983, as the beach area was growing even then. “. . . and what was the original ground floor is now the basement,” Forth said. Waitarere Beach has an accreting coastline, unlike most of the West Coast beaches in the lower North Island, which are being eroded away by the wind and sea. Accretion occurs when waves break over longshore bars at sea and sand is moved on shore. During HDC’s Long Term Plan deliberations on Wednesday, May 26, chief executive David Clapperton recommended the funding for the Levin-Waita¯rere Beach Surf Life Saving Club building, for design and build, be brought forward to Year 1 and Year 2 of the LTP, with $1.654 million allocated each year. Councillor Sam Jennings moved that the original requirement for the surf club to source third party funding contributions of $1.5m, as part of the CEO’s recommendation, be reduced to $1m, with $200k having to be raised in Year 1 and $800k in Year 2. “Fundraising potentially half of the costs is possibly unrealistic in the current [economic] climate.” Councillor Piri-Hira Tukapua stated the clubrooms were a priority for the Waitarere Community Plan and so this needed to be a priority for the LTP, “especially when compared to the $4.7m earmarked for Waitarere Domain”. With it being established the new surf lifesaving club building would be a council owned asset once completed, the amended motion for funding was passed unanimously. Waitarere Beach Progressive & Ratepayers Association member Fred de Jager, who lives directly behind the current clubrooms, said he won’t hold his breath but is hopeful he will see some progress being made over the coming months. “I’d like to see the new building [being mixed use], like meeting rooms for other clubs and groups in the beach community,” de Jager said. The LWSLSC committee met last Thursday night to discuss the next phase of the building process. The group already have draft designs and plans based around what functions the building needs to accommodate. Chairman Andrew Parkin said the club need to finalise the design brief then, along with the Horowhenua District Council, they need to select architects to get the final design plans under way. It also needs to apply to the new central government fund for surf life saving, set up in 2020, before the end of this month to assist with the $800k funding they need to source for the 2022/2023 period. “The fact the council are cornerstone funders for the new building should work in our favour with our application to the surf life saving fund,” said Parkin. “ Parkin said the club is really excited to start the process after over 10 years of petitioning for new clubrooms, although he anticipates the build will not be completed before at least December 2022. 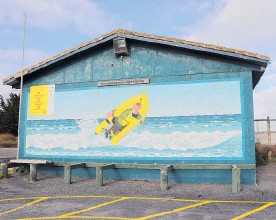