One match that went to the fifth sudden death play off hole, top seeds being upset and the continued emergence of young golfers were all part of round 2 of the Whangamata Golf club men’s match play competition. After 18 holes the senior match between number one seed Rob Peart and number eight seed Allan Smith was all square. Another tense sudden death five holes were needed to separate these players. The crowd slowly gathered as each player looked to secure this match. Peart won out against a resolute Smith to book a semifinal spot against Brian Grafas. In the intermediate division Merv Rogers seeded 17, currently in a hot streak of form, beating number one seed John Packham. Rogers plays battling Alan Peard in round three. Hole in one ace Peter Millen seeded third and lost to the ultra steady Kim Eng seeded 14th. The growth and emergence of young golfers at Whangamata saw teenagers Hunter Ussher and Otis Baxter stay alive in this match play competition. Hunter, in the senior competition beat Leigh Goodman, and will play Logan Scott in one semifinal. Sixteenth seed Otis Baxter showed true resilience and concentration to edge past Gary Small who was seeded one in Junior A. Both Hunter and Otis have officially caught the golf bug and continue to develop and grow their games. Otis thanked his sponsor James Corlett for a new golf bag. Also Otis has his own personal caddy Hunter Cooney who does an excellent job carrying the golf clubs. Junior B semifinals have mouthwatering match ups between Michael Jurisich versus Merv Michael and Stu Cashen versus Dave Davenport. 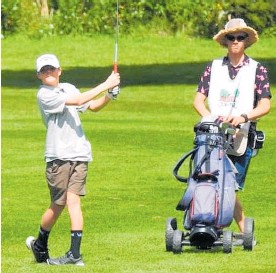