Promising outlook for the main tourney in July 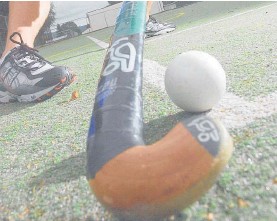 The Hawke’s Bay hockey competition took a break for Queen’s Birthday weekend, although the under 18 girls and boys squads had a tournament to attend. With representatives from Central Hockey Club, the two squads performed exceptionally in their three games with a promising outlook for the main tournament in July. Last weekend the Satherley Logging Women’s Reserves had a bye and the Unichem Women’s Premiers’ opponents, Havelock North, called a last minute defer due to lack of players. This game will now be played at home, Waipukurau, on Tuesday, July 5 at 6.30pm. The NZ Trellis Men’s Reserves came up against Napier Tech Premier who have recently arrived in Division 2 from a competitive Division 1. The Central side hadn’t faced them before and were not sure what to expect. Sitting 1-0 down at halftime, the NZ Trellis Men’s Reserves were off to a good start. Tech tried hard to breach the goal but with the strong defensive line working hard together the team managed to frustrate Tech with their attacks being blocked. Second half saw Tech apply even more pressure and they were able to score a few impressive goals. The score didn’t reflect the game and with only 11 players taking the field the whole team picked up player of the day with everyone digging deep and going all out for the game. Final score 5-0 to Napier Tech Premier. Last weekend had the whole club back in action and all playing at Napier’s Park Island. Satherley Logging Women’s Reserves fought a tough battle with Bay Toi Toi. With newly appointed team coach Kelsey Stubbs, the team have been working on teamwork, passing and tight skills. A work in progress but they showed great parts of passing, communication and working together. The final score was 1-1, gaining 1 point for the results table. Kelsey is proud and looking forward to what is to come. NZ Trellis Men’s Reserves were thrilled following their intense match against Bay Independent 2. The last time the Central side faced this team, they went down 4-1. With the hunger to improve on this and a couple of key players back in force, NZ Trellis Men’s Reserves held them to a 1-all draw. This result came from some great linking in the forwards and exceptional, strong defence who kept the goal secure until the last six minutes where Bay Independent threw a 3v1 attack. After what seemed like endless pressure from the beginning of the game, the forwards managed to link up, opening the scoring. The final score of 1-1 draw was a great result and clearly impressed the spectators as there were plenty of comments stating it was one of the best games they have seen lately. Player of the day went to Ross Fraser. Saturday’s game against Bay Independent 1 for the Mark Boys Men’s Premier Team was a tough one with Central unfortunately conceding two own goals in the first half. Once again this was a game where the end score didn’t fully reflect their performance. The first half was a struggle but the premier team stepped into their own and controlled the pace of the game in the second half, resulting in a very structured game being played out. Holding Bay back in the second half resulted with them only scoring 1 and although unable to find the back of the net, the Central side had many opportunities and good consistent possession of the ball. This week’s player of the day went to Dave Down. With a sombre start and a standin goalkeeper, Unichem Women’s Premier still stepped out with a win in their minds. Down a few key players due to injury and illness, Central held fast against a very energised Bay Ferns. Being Bay Independent Club Day, their team came out all guns blazing and caught the girls off guard scoring 3 in the first quarter. This didn’t dampen spirits as the players took to the field ready for round 2, only allowing in 2 more to complete the first half. The second half brought lot more attacking and some missed chances for Central. The opportunities had the team in high spirits. Only 2 goals slipped past in the 3rd quarter as the players started taking control and showing some real flare and teamwork. The 4th quarter came with Central having more ball than the earlier 3 quarters and things looked promising. A few fantastic saves from Central’s goalie kept Bay scoreless in the 4th quarter which they took as a win. With Emma Johnson taking player of the day, the women left it all out on the turf and walked off with heads held high.