WEATHER: Even experts are surprised by the number of ‘red warnings’, writes 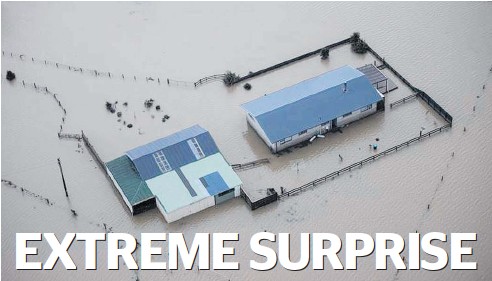 Aspate of damaging extreme weather events — including three big deluges in recent months — has left even MetService meteorologists surprised. The national forecaster introduced its ‘red warnings’ — advisories reserved only for the most extreme weather — three years ago, and it’s since had to issue seven of them. But six of those — including a Westport deluge that left about 450 homes damaged or uninhabitable, and Canterbury floods that put swathes of farmland underwater — have occurred in just the past 12 months. “When we introduced the system, we had expected one or two events per year,” said Lisa Murray, MetService’s head of weather communications. “It’s fair to say we’ve been somewhat surprised by six in the past year, three of which have happened in the first five months of 2022.” Between 2010 and 2019, a total of 14 weather events led to local states of emergencies being declared. Other events over the recent spate have included another West Coast deluge in early February that forced hundreds of evacuations, and storms in March and April that wrought hundreds of millions of dollars in damage on the North Island’s East Coast. “We work closely with regional councils ahead of issuing the red warnings and during the events to understand local concerns,” MetService severe weather manager Elke Louw said. “The more forewarning we can provide, the more time communities have to prepare and stay safe.” While each event was different, recent ones shared some common threads. Most coastal regions around the country had been experiencing periods of severe or strong ongoing marine heatwaves — especially in the North Island, with waters in the Wairarapa reaching 3C above average for this time of year. “Warmer waters around us means the air above it heats up, there is more moisture in the air and this feeds into any weather system, especially those that come from the tropics which means we are seeing more intense weather events,” Louw said. A big influence is La Nin˜a, an ocean-driven climate system that’s been meddling with our weather since late last year — and may do again later in 2022 if a rare “triple dip“of these events plays out. For New Zealand, La Nin˜a meant more northeast winds from the subtropics, leading to higher-than-usual rainfall in the northeast of the North Island, as seen in autumn’s big East Coast storms. Some of these big downpours had come in the form of snaking, moisture-packed systems called ‘atmospheric rivers’. “These conveyor belts can stall over a part of the country, delivering continuous rainfall for a number of days, or are a highway for deep tropical lows to come visiting,” Murray said. “A warmer atmosphere due to climate change will make more moisture available in these atmospheric rivers which can get dumped on our doorsteps.” On average, every degree of warming was adding an extra 7 per cent of moisture into the atmosphere, intensifying visiting weather systems. “For example, a tropical cyclone is likely to have more energy now as opposed to 50 years ago — so can be more intense and more damaging.” Scientists have already estimated the extreme rainfall that caused Canterbury’s flooding last year was 10 to 15 per cent more intense because of human-driven climate change — with a similar-sized influence also observed in last year’s Westport disaster. “Studies have shown us that we can expect an increase in the intensity of big rainfall events, especially in areas like the west coast of the South Island,” Murray said. “So, with more extreme events in the future, then it is likely that Aotearoa New Zealand will have more red warnings.” MetService was working towards continually improving weather models and tools, giving meteorologists more detailed information with longer lead times when issuing warnings. “Hopefully, Aotearoa New Zealand will also have climate change mitigation measures in place which will enable our infrastructure to better cope with extreme weather events.” The Government recently put out for consultation its draft National Adaptation Plan, which aimed to determine how the country should meet climate-driven impacts, and fund the costs that came with them. According to our most recent national risk assessment, some 675,500 Kiwis already live in areas prone to flooding — with a further 2,065 living in the firing line where some of the most dramatic effects of sea level rise could hit. Some players in the insurance sector — which just saw two years of record weather-related claims, likely totalling more than a billion dollars — have responded to a rising flooding threat by moving toward new riskpricing models. Victoria University climate scientist Professor James Renwick expected the slew of recent events would’ve helped make the climate crisis more real to Kiwis. “What we’ve seen happening here fits in exactly with what we can expect from climate change.”