McAnulty fronts up for questions

Wairarapa MP Kieran McAnulty held two meetings with the public in Dannevirke May 26 and 27, the first speaking to Grey Power and the second to interested citizens at the Tararua Business Hub. His purpose was two-fold — disseminating information about government policy post budget and gauging the feel and concerns of the electorate. He opened with a feel-good summary of New Zealand’s position in the world — the largest economic growth and lowest unemployment in the OECD — the top 23 world economies — and up there with Taiwan as the best managed countries in the fight against Covid-19. He outlined the three priorities in the budget: ■ To continue to keep NZ safe from Covid-19; ■ To accelerate economic recovery; ■ To lay the foundations for the future addressing key issues like housing affordability, child poverty and climate change response. These were some of the issues asked about at the Tararua Business Hub when a group of 25+ local business and retired people came armed with questions. Increasing welfare payments was his first issue, McAnulty saying it corrects a wrong by returning their levels to 1991 relative to the economy. He said the increases would also be spent in the local economy stimulating it. Worries about dropping dairy and sheep/beef exports by volume although not by price was countered by his government’s concentration on building trading partnerships with the likes of the UK and EU, selling our brand as environmentally efficient in a globally conscious world. Concerns about electricity supply with e-vehicles increasingly encouraged was raised by Horizon’s Regional Councillor Allan Benbow pointing out the trend for the percentage of renewable power to drop in recent years. This drew a confirmation that the plan was to be 100 per cent renewable by 2030 through the promotion of wind farms like that planned in the Puketois, directing power until now used at Tiwai Point and rationalisation of the structure. Orchards in the Hawke’s Bay being taken out due to a lack of pickers drew a response that 500 spots for island workers from the Australian MIQ allocation had been available and more were planned. This led to a complaint from Community Board member Terry Hynes about the huge wait for overseas workers on work permits being unable to gain citizenship due to delays by Immigration. Acknowledging Terry’s huge efforts in this regard McAnulty said there was a priority to confirm the best people and those waiting “were safe in New Zealand” while applying. Great concern about the transition from District Health Boards to the new structure was voiced by Councillor Sharon Wards wanting to know when the new structure would be in place and an assurance no services already operating will be lost, especially mental health. McAnulty asked for a letter outlining specifics for Tararua to take to the Health Ministry and promised the new structure would be announced by year’s end. Budget drops in funding for the police and road safety were raised especially with increased violence and shootings, McAnulty saying the huge increase in police funding last year to put 1800 new police on the beat was a one-off and funding is returning to previous years. He said gangs evicted from Australia were a major problem but police successes were as numerous as gang shootings and police should publicise this more. Social Housing drew the most significant response from McAnulty announcing that two staff from Kainga Ora the Social Housing Ministry would soon be working in Tararua to find suitable sites for social housing. (See related article) In terms of the housing shortage, great concern was expressed at the lack of materials, tradies and land currently available to remedy the issue, McAnulty saying there should be a Royal Commission into the supply of materials because NZ businesses were closing when demand has never been stronger. As for tradies, he said the government has increased incentives for apprentices and there are more in training than in a lifetime. He said the government is aware many tradies will retire in the next decade and they need to pass on their knowledge before that happens. Land shortages for housing was covered, McAnulty saying the RMA will take some time to be revised. “To get it right for the next 50 years is one of the biggest legacies we can leave,” he said. He favours both government and private spending for new housing, saying the Bright Line policy is already starting to turn investors into building houses rather than buying existing ones. The sad state of wool drew comments that Minister of Agriculture Damian O’Connor had started a programme to encourage new products from wool like insulation and to promote wool globally as an eco-friendly product. Concern about the withdrawal of banking services from rural towns was shared by the MP, especially concerned for the elderly and local businesses It drew some information from McAnulty about the Banking Hub being trialled at Martinborough, saying the town has one of the highest tourism spends in NZ and after initial problems and the addition of a coin/cash service the hub is starting to work better and it could be the prototype for the nation starting with expansions to Pahiatua and Waipukurau. 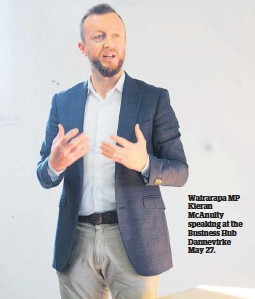